Moeen Ali finished a brilliant campaign with a five-wicket haul as England beat South Africa by 177 runs in the fourth Test at Old Trafford to seal a 3-1... 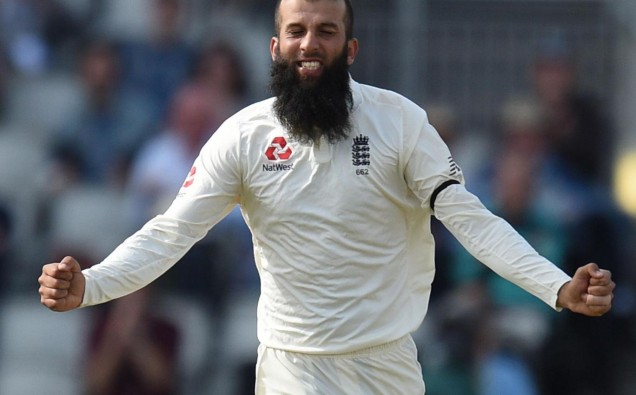 Moeen Ali finished a brilliant campaign with a five-wicket haul as England beat South Africa by 177 runs in the fourth Test at Old Trafford to seal a 3-1 series win.

Victory, achieved with more than a day to spare, also saw Joe Root triumphant in his first Test series as England captain.

South Africa, set a huge 380 for victory, were bowled out for 202 shortly after tea on the fourth day when Ali took two wickets in two balls to remove Morne Morkel and Duanne Olivier.

That gave the off-spinner a return of five for 69 in 19.5 overs and 25 wickets in total in a series where he also scored 252 runs.

This result meant England had won their first home Test series against South Africa since 1998.

It was also just South Africa’s second defeat in 20 away Test series, their other overseas campaign reverse in that sequence coming against India in 2015/16.

But Ali then took three wickets for five runs in 11 balls — including the prize scalp of Amla — as the Proteas collapsed from 163 for three to 173 for six.

Earlier, Ali, both the man-of-the-match and the man of the series, made 75 not out off just 66 balls in England’s second innings 243, having been dropped on 15.

That left South Africa facing a mammoth chase, with no side having made more to win in the fourth innings of a Test at Old Trafford than England’s 294 for four against New Zealand in 2008.

South Africa’s already difficult task was not helped when they lost both openers, leaving them at 18 for two.

Dean Elgar, who made a gritty second-innings hundred in England’s 239-run victory in the third Test at The Oval, fell for five on Monday when caught behind off Stuart Broad.

Temba Bavuma again battled hard until, from the last ball before lunch, he was given out caught behind on review off Toby Roland-Jones.

Amla completed a 100-ball fifty with his ninth four, a pull off Ben Stokes. He then twice forced Stokes off the back foot for two stylish offside fours before driving Ali for six.

But with South Africa 163 for three, Amla missed an intended whip shot off Ali and was lbw, although England, for the second time on Monday, had to first review umpire Kumar Dharmasena’s original not out decision.

No replays were required when Quinton de Kock edged a drive off Ali to Alastair Cook in the slips. 173 for five became 173 for six when Theunis de Bruyn fell for a duck, nicking Ali to slip fielder Stokes.

The end came quickly for South Africa, 182 for six at tea. Du Plessis, who played at Old Trafford for Lancashire, had added just one to his tea score when he was caught behind off Anderson, England’s all-time leading Test wicket-taker.

Anderson, who finished with three for 16, then had Kagiso Rabada caught in the covers.

Ali, appropriately, finished the match with Morkel holing out for a duck before Olivier, also out for nought, was taken by Stokes at slip.

Ali recently spoke out about the South Asian involvement in British cricket, saying more work was needed if English cricket was to make the most of this enthusiasm for the sport.

He added: “Now, a lot more south Asian people are thinking: ‘Actually, I could make a good career from this now.’ But it’s also down to the counties to do more to help South-Asian kids.”

“Look at Warwickshire. This is a big city of Asian people, so why can’t you produce any south Asian players? I don’t understand.”

The England and Wales Cricket Board have launched a south Asian initiative to help develop players from those backgrounds and Ali said: “It’s a very good step in the right direction to ask people how the ECB can help them. It’s very positive because the pool of talent is vast.

“But the south Asian mentality must also change. Cricket is not just batting and bowling. There’s a lot of physical stuff, fitness, fielding, diet, discipline, being on time.”

The bearded Ali, a 30-year-old off-spinning all-rounder, is also one of the most high profile practising Muslims in British public life.

“There is such negativity in the media around Islam but when I play cricket for England I don’t have to say anything,” Ali added.

“I’m hoping people look at me and other Muslims and think: “Actually, it will be all right. They’re not too bad.’”Meanwhile Ali, who made his name as a batsman, was hailed as an “unsung hero” by former England captain Alastair Cook.

“It has been an amazing series for Mo, he is a legend,” opening batsman Cook told BBC Radio Four’s Today programme.

“He is the unsung hero in one sense. He came into the side a few years ago when I was captain as a guy who could balance the side and bowl a little bit of off-spin and now he is the leading wicket-taker in the series.

“His off-spin is actually very good, he’s not (former England off-spinner) Graeme Swann but his record is improving all the time.”

The Khans call it quit after social media brawl

Bearded Broz’ tackle Birmingham one bin at a time