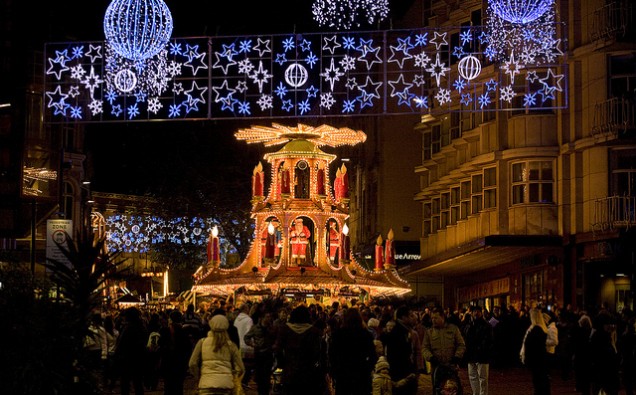 The German Markets are back for 2017, but they will be different this year. During 2014 and 2015 the market finished on December 22nd and packed up by December 23rd, allowing the traders to get home to Germany in time for Christmas.

However, in 2016 the seasonal attraction stayed open until after Christmas, almost up to New Year, for the first time ever, finishing on December 29th. This extension was due to the celebrations of Birmingham’s 50 years of twinning with Frankfurt. So when do the German Markets start in Birmingham? And what are the dates for 2017?

What is the date for 2017 German Markets?

Birmingham’s German Market will take place from Thursday, November 16th to Sunday, December 24th. So the markets will be here a little longer than expected, but not as long as it did during 2016 special extension, although it will go through to the end of Christmas Eve. This will give people the chance to enjoy the markets for a longer period of time, as well as eat, drink and shop at the markets right up until Christmas.

The market is branded by the council and its organiser Kurt Stroscher as the Frankfurt Christmas Market Birmingham. The markets take place outside Victoria Square and New Street and are well known for being the largest the market of its kind outside Germany and Austria.

Kurt Stroscher, (Market organiser) who is the Frankfurt City Council’s Director of festivals and events told the Birmingham Mail: “Last year we celebrated the 50th anniversary of the partnership between Birmingham and Frankfurt, therefore the market took place until the 29th of December. This year there is no anniversary and every year we discuss which time the market should finish and this year we decided
the 24th of December.”

What are the opening times?

Birmingham’s German Christmas Market will be open from 10 am to 9 pm 7 days a week. The atmosphere is always crowded and bursting with excitement, especially on weekends, as it tends to be our busiest times. Weekdays are less chaotic but the crowds are still buzzing, as they enjoy the delicious tastes of exotic hotdogs and beer. After 5 pm on weekday evenings, the crowd can become hectic as people are finishing work and like to stop for a bite to eat, as well as browse around the markets. After all, Christmas comes and goes quickly.

What is available at the German Market?

The German market sells a wide range of hot and cold foods. These include German style sausages (bratwurst, currywurst, krakauer, kasewurst, feuerwurst) as well as schnitzel, strudel, pretzels, crepes and Berliner doughnuts (which have no hole in the middle). There is also a selection of burgers, fries, pizzas, waffles, steaks and deep-fried
vegetables.

Drinks include beer, mulled wine, or otherwise known as (gluhwein) hot chocolate (with or without spirits) and coffee or tea.

The market is usually accompanied by the Christmas Craft Market, located on Centenary Square. This market also sells food/drink as well as local goods from West Midlands traders, and even handcrafted ethnic goods from around the world. But there have been reports that these markets will not be opening this year due to the building work that happening on the square.

There’s only two months to go, and stall holders have not been asked for their payments for their pitch on the market. The council have stated that no decision has been made yet as to whether these markets will take place this year.

Even the famous ice rink and the big wheel will NOT be in Centenary Square this year, due to the £10 million redevelopment that is happening in the city centre.

This situation has angered many Birmingham residents, locals have even branded the council as DISGRACE for failing to accommodate two local attractions.

BIRMINGHAM INTERNATIONAL MARATHON. DID YOU GO?