Vegetable crisps are reported to be more unhealthy than Gulab Jamun 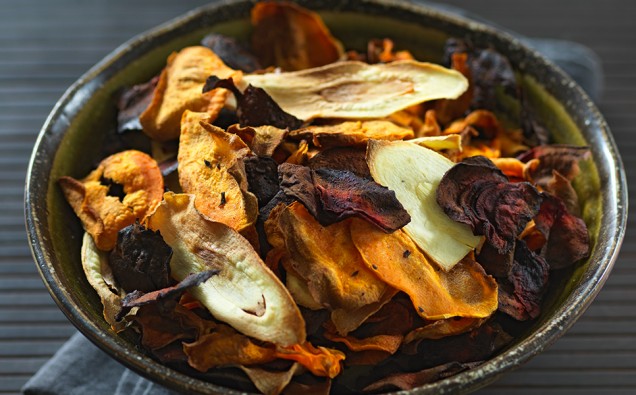 Sweet potato, beetroot and carrot – all of these vegetables can be turned into tasty crisps to help curb your cravings. However, it turns out that one of your favourite ‘healthy’ snacks might not be so healthy after all. A recent study carried out by registered nutritionist Charlotte Sitling- Reed for Wren Kitchens has found that, in reality, vegetable crisps can be worse for you than ordinary crisps.

It has been proven that a standard bag of vegetable crisps can contain just two thirds
of vegetables, with the rest made mostly of salt and oil. Thus increasing the fat content of each packet well above other snacks that are considered to be unhealthy. For instance, the data found that a 40g pack of vegetable crisps had more fat than the same serving of salted Pringles and nearly double that found in a Mars Bar. While a bag of Tyrells Mixed Root Vegetable Crisps contained 14.3 grams of fat, a Mars Bar measuring in at 8.6g with a Krispy Kreme Original Glazed Doughnut with only 8.3g.

Alternatively, you may be better off treating yourself with a packet of Walkers Quavers which contain 12.3g or the brand’s Salt & Vinegar French Fries which contains only has just 6.4g. “The concern with products that are often seen as ‘healthier alternatives’, such
as vegetable crisps, is they don’t always match up to their reputations,” Stirling-
Reed explained. “Crisps are crisps, and even if they are made with vegetables, they are likely to contain too much in the way of fat, saturated fat and salt. In fact, the vegetable
crisps here have higher levels of saturated fat and salt than some well-known, regular
crisp brands.

“As a nutritionist, I’ve seen this first hand in weight loss clinics where clients may eat even as much as double a portion size of a product if it’s perceived to be healthy.”

THE RUMBLE IN THE JUNGLE