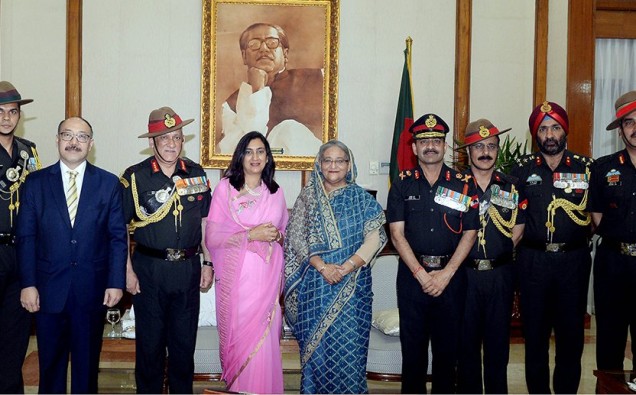 During the meeting, Hasina emphasised the importance of cooperation between the two countries in nuclear power projects.

Rawat said: “We value our friendship with Bangladesh and we deal everything with equal status. Size of the country doesn’t matter here.”

Regarding the ongoing joint cycling expedition of the two countries, Rawat said the two armies have very excellent relations.

He stressed the need to strengthen cooperation between the Bangladesh and India armies, adding that the two armies have equal status in all fields.

He also praised the execution of the land boundary agreement between Bangladesh and India.

According to the Inter-Services Public Relations (ISPR) press release signed by Md Nur Islam, assistant director at the ISPR Directorate of the Ministry of Defence, the delegates and hosts expressed their hopes of taking the cordial relationship between the two countries further and stressed the need to maintain bilateral cooperation in the training of military members, as well as in terms of improving their professional expertise.

The naval chief, air force chief and the PSO-AFD also remembered the members of Indian armed forces who died in 1971 Liberation War with reverence and expressed profound gratitude for their sacrifice.