A group of angry parents have taken their children out of scheduled lessons, discovering that they were being taught about LGBT rights and that ‘it’s okay to be gay.’... 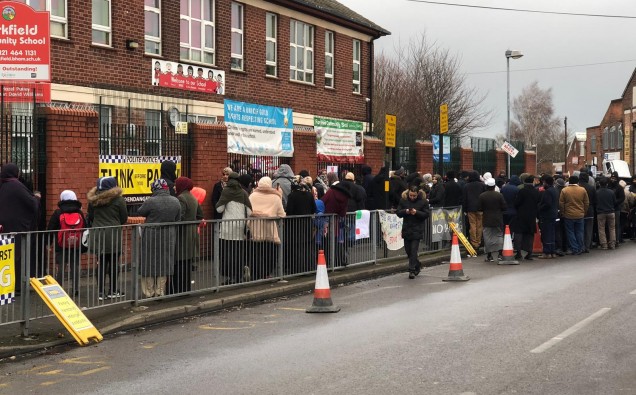 A group of angry parents have taken their children out of scheduled lessons, discovering that they were being taught about LGBT rights and that ‘it’s okay to be gay.’ Andrew Moffat, the assistant head teacher at Parkfield School, has faced disapproval by parents for conducting the ‘No Outsiders programme’ as well as Sex and Relationship Education (SRE) lessons.

One of the parents, Fatima Shah was outraged in discovering the newly implemented curriculum and took her 10-year-old daughter out of the school. She has affirmed the school has a 98% Muslim majority and many of the pupils’ parents are against the teachings. Mr Moffat has introduced books on the curriculum, such as Mommy, Mama and me, and group activities in class of the children drawing family pictures which contain same-sex parents and promote Gay marriage.

Another parent Mariam Ahmed, whose daughter attends the school, organised a petition against the programme which has been signed by 400 parents. She also stated at this age it is wrong to teach children about these types of matters.

On the 3rd of February 2019, there was an organised public meeting, where parents from several different schools were also present in order to cover the same issue. At the meeting, Fatima Shah had stated a line from the no outsider’s programme syllabus: ‘We need to teach 5-year-olds Gay and Lesbian women exist.’

Mariam Ahmed had also stated that Muslims, Jews and Christians were all in agreement that homosexuality should not be taught in schools. Another school named Nansen Primary were questioning beginning a similar programme, but after discovering what was contained inside the book they did not implement it.

Amir Ahmed, one of the organisers for the public meeting said: “The local school Parkfield in Alum Rock has implemented a programmed called no outsiders by Andrew Moffat. And what he is attempting to do is changing our children’s belief around sexuality. We expect that our children learn to respect all human beings, but we don’t want is that their belief is changed. And this is what he is doing. And that is what we are protesting against, which is why we want this to be withdrawn from the school and want an apology. An investigation should take place as well as to why this happened against the wishes from the parents.”

On the day of the protest outside the school on Thursday the 7th of February, a huge number of parents were protesting outside of the building alongside their children and chanting ‘Stop the no outsiders programme.’

Asian World News interviewed Parent Fatima Shah further to gain an insight into the perspective of the parents of pupils being taught the programme at the school.

What statement can you give about the running of the protest outside Parkfield Community School?

I am very happy for the turn out today. So many brothers and sisters came. We were really pleased that people from the Christian community came all the way from Wales to support us. Petition complaint forms were handed in today. I think if we weren’t heard before. We definitely have been heard now.

When did you first find out that the school was running the ‘no outsiders programme’?

We found out literally two months ago. Even though it has been going on for four years and, none of the parents were formally informed. Mr. Moffat said it himself that only two people came to the meeting in order to discuss the prospect of implementing the curriculum in future, but then he took it upon himself stating that parents were on board and then he implemented the no outsiders programme himself.

A petition was made how many parents have signed it?

Over 400 parents have signed it. As you can see the turnout today, no one is forced to be here. They are all here in order to give their support and stand by our side.

If the ‘No Outsiders’ programme is continued, will you allow your child to continue their studies in the school?

I think a lot of parents have come together and come to an agreement that if Mr Moffat doesn’t back down and change his ethos, and come to show some compassion with our community, then yes we would have to take our children elsewhere. It is a shame because the children who are in year 6 are taking SATs exams, so they shouldn’t be pulled out of school, but if it comes to that we will do it

Members of the Christian Community also supported Muslim parents in their protest, stating: “We are standing 100% with you. We have to protect the children’s innocence and you are doing a brilliant job. Keep up the good work.”