At least 10 people, including six policemen, were killed and dozens left injured on when militants belonging to the banned Tehreek-e-Taliban Pakistan launched two separate attacks in Dera Ismail... 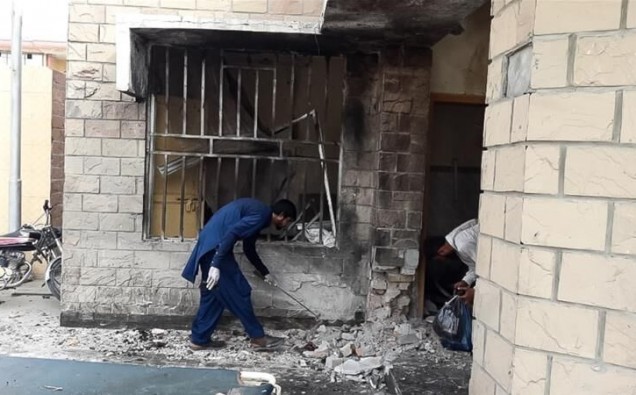 According to the details, four unidentified gunmen on motorcycles opened fire on policemen at the Kotla Saidan checkpost in a residential area on a Sunday morning, killing two policemen, identified as Constable Jahangir and Constable Inam.

The incident was immediately followed by a suicide blast outside a hospital, where the injured were being shifted for treatment.

The bomber struck at the entrance to the hospital, murdering another four policemen and three civilians.

All of the wounded were later shifted to a military hospital.

Speaking to a local news outlet, a forensic expert revealed that the attacker was purportedly a woman who set off 7 kilograms of explosives packed with nails and ball-bearings.

District Police Officer (DPO) Salim Riaz told Media the blast was a suicide bombing carried out by a woman. He said: “The woman bomber, aged around 28 years, came on foot and blew herself up.”

Another local police official, Malik Habib, also told that officers had recovered the mutilated head of the bomber.

Further, DPO Salim Riaz said that about 30 others were also injured in the two attacks and added that the attack appeared premeditated.

While police and other law enforcement agencies have cordoned off the area and a bomb disposal squad searched the site, the death toll rose steadily.

Responsibility for the attack has been claimed by Tehreek-e-Taliban Pakistan (TTP) spokesperson Muhammad Khurasani in a statement to the local media.

Khurasani said the attacks were carried out to avenge the killing of two Taliban commanders by the Counter-Terrorism Department (CTD) in DI Khan on June 23.

He, however, denied that the suicide bombing was tasked to a woman.

Prime Minister Imran Khan, strongly condemned the terrorist attack and expressed his deep grief and sorrow over the loss of lives in the incident.

“The prime minister prayed for the eternal peace of departed souls and bereaved families to bear the loss with equanimity. He also directed for provision of best medical treatment to the injured and also prayed for their early recovery,” the PM Office media wing in a press release said.

Leader of the Opposition in the National Assembly Shehbaz Sharif also issued a statement of condemnation and expressed his condolences. “We are proud of our police officers who embraced martyrdom to protect the public,” he added.

Foreign Minister Shah Mehmood Qureshi, also condemned the attack termed the incident “a failed attempt” adding that such cowardly acts could not plummet their morale.

Pakistan People’s Party (PPP) Chairman Bilawal Bhutto Zardari condemned the attack by stating that the entire nation is one page when it comes to terrorism and extremism.

KP Chief Minister Mehmood Khan also condemned the incident and said that they shared the grief of the victims’ families. “Terrorists do not have any religion,” he said while adding that no religion allows attacks on innocent individuals.