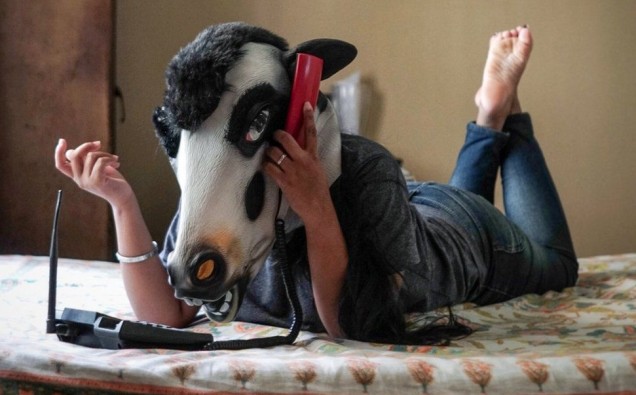 A photography project in India showing women wearing a cow mask, went viral for questioning the importance of women in the land of cow worship.

‘I am perturbed by the fact that in my country, cows are considered more important than a woman, that it takes much longer for a woman who is raped or assaulted to get justice than for a cow which many Hindus consider a sacred animal,’ the 23-year-old photographer Sujatro Ghosh told the BBC.

His project shows women from different cities wearing a latex cow mask spreading a message that women should be considered as important as cows. He also sheds light on the debate of cow slaughtering and considers this as “his way of protesting” against people who act like vigilantes and punish people for eating beef.

Because cow slaughter has been banned in several states in India, in the past two years, nearly a dozen people have been killed for knowingly consuming or rumoured to have consumed cows. Muslims seen transporting cows even just for milk have also been attacked in the past.

‘We’re waiting for verdicts for five to seven years (in cases related to crimes against women),’ Ghosh told Quartz. ‘When it comes to cows, it’s coming up as violence and (people are) getting beaten up and lynched each and every day,’ he added.

One such incident occurred when 15-year-old Junaid Khan was stabbed to death by a group of men on his way back from New Delhi after shopping for Eid. They asked him and his brothers to give up their seats on the train. When refused, the men taunted them for eating beef and then stabbed them.

Thousands of Indians then took to the streets to protest against such rising attacks under the slogan “Not In My Name” criticising Prime Minister Narendra Modi for not taking enough steps to disapprove such attacks or punish the attackers.

Modi reacted to this issue saying that killing people in the name of cows was not acceptable. ‘No person in this nation has the right to take the law in his or her own hands in this country. Violence never has and never will solve any problem,’ he added.