It’s been a busy weekend for Sanjay Leela Bhansali and the Bajirao Mastani team, with the unveiling of both the brand new Mastani poster and the...

[London 9th November] It’s been a busy weekend for Sanjay Leela Bhansali and the Bajirao Mastani team, with the unveiling of both the brand new Mastani poster and the launch of Blazing Bajirao, a graphic web series!

Last Friday, Ranveer Singh launched the release of the Blazing Bajirao web series, unveiling a six-foot tall life-size Bajirao figurine. A first for the Indian film industry, Blazing Bajirao is a digital graphic series, created to teach audiences about the life and history of lead characters Bajirao and Mastani. The series is releasing ahead of the film on Eros International’s on-demand entertainment portal, Eros Now. 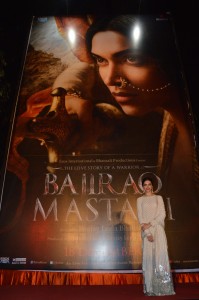 Taking selfies with the life-like model of his character, Ranveer Singh said: “Blazing Bajirao is an attempt to tell our young audiences about the legend of Peshwa Bajirao. Bajirao was a master strategist and a warrior and this web series highlights the various facets of his personality and the skills he possessed. Blazing Bajirao gives you important historical nuggets on him, but in a cool, creative and engaging way.”

While Ranveer Singh busied himself with the launch of Blazing Bajirao, his co-star and onscreen love interest Deepika Padukone, launched the official Mastani poster for the film. Over 60-feet long, the poster was unveiled at Mehboob Studio. Deepika looked stunning in a cream sari as she proudly presented the film’s official Mastani poster. Deepika’s already been talking about how Bajirao Mastani has been the toughest film of her career both physically and emotionally, but speaking to the crowd, she added that every woman will be able to relate to Mastani.

With Ranveer Singh playing Bajirao and Deepika Padukone playing Mastani, the exciting blockbuster will hit the big screens on 18th December. Also starring Priyanka Chopra, Bajirao Mastani tells the story of one of the least known areas of Indian history – that of the Maratha and Peshwa princes and the battles between the Mughals to create the princely states, and the love story of Bajirao, The Warrior.