The arduous task of planning a wedding is demanding- to say the least. Choosing the right caterers, picking the perfect venue and of course the all important colour co-ordinated outfits, are all part and parcel of making your big day perfect. As the most romantic day of your life, you want to profess your love for all the world to see- well, at least your guests. For one Sikh couple, they wanted nothing more than to break the barriers. They certainly left their mark!

The most prominent part of a Sikh wedding is when the couple is joined by a single piece of cloth and begin to circle the Guru Granth Sahib. This (lavan) reminds the couple that God should remain at the centre of their lives and how two souls are united to equally become one. Traditionally, the bride walks behind the groom.

Guru Ram Das says on page 788 of the Sri Guru Granth Sahib of the meaning of marriage to a Sikh couple: “They are not said to be husband and wife who merely sit together. Rather they alone are called husband and wife, who have one soul in two bodies.”

Shawn Singh Tucker and Baljit “Bally” Kaur Lehal saw the beauty in the Anand Karaj and wanted to apply the true meaning of it to their wedding.

“We walked side-by-side during our lavan,” said Shawn.

“As a kid, when I watched my cousin sister get married, it didn’t make sense to me that the bride walked behind the groom,” said Shawn. “I wondered ‘If men and women are equal in Sikhi, like my parents keep telling me, why is it this way?’ From then on, I knew I wanted to try something different.”

“Before the wedding, Shawn told me he wanted to do the wedding differently,” said Bally. “He said, ‘If you want to get married, you have to do this one thing for me…you have to consider doing the lavan differently.’ ” 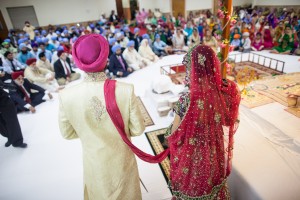 “In Sikhi, marriage is one of the biggest public statements that you make. Sadly, in our society men always come before women; men are central and public. But in Sikhi, we are supposed to be equal so, it really bothered me that our most sacred religious ceremony put the man first,” said Shawn. “Plus, I’ve told all my non-Sikh friends that equality is a core Sikh value so if they were to see me walking in front, it would be really hypocritical. It would make no sense.”

Shawn’s mother was worried about what others would say and preferred they do anything unconventional in a hotel rather than in a Gurdwara, “You’re going to be ridiculed,” she said. His dad felt similarly, “This is going to be a joke wedding.” After talking through it, Shawn’s parents said they would allow it if the head granthi at gurdwara approved. “I think they were banking on him saying ‘no,’” said Shawn.

“So, I went to talk to the bhai sahib and his response was, ‘You have a point. Walking side-by-side does make sense in terms of Sikhi.’ He told me that throughout Sikh history, the Anand Karaj kept changing and everyone would do it differently, so for uniformity, it was eventually codified in the Rehat Maryada. ‘But that doesn’t mean that the groom walking in front of the bride is necessarily the best way or the right way. In my view, as long as you walk around the Guru Granth Sahib, you can do it however you want,’ he said.”

“I was nervous,” said Bally. “But I saw Shawn next to me and saw him smile, so it calmed me down. I felt less alone, it felt really good.”

“It was really nice,” said Shawn. “It was nice to check-in with Bally and whisper, ‘Are you okay?’ We were doing it together.”

After the wedding, the sangat’s reaction was overwhelmingly positive.

“Old aunties and uncles came up to us, wide eyed and said, ‘That was amazing! I wish we had gotten married that way!’ A few younger college-aged Sikhs said, ‘That was awesome. I’m gonna do that when I get married,’ ” said Shawn. “My parents, who were originally against it, saw everyone’s positive reaction and are now saying it was their idea!” 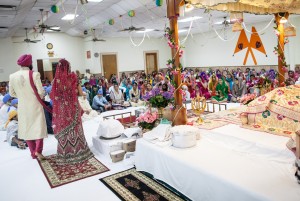 Beards are hot in fashion