For the world Hindi cinema last 2-3 years have been rather fortuitous as it has seen emergence of new breed of film directors who are not inclined to follow the beaten path of the usual dance and drama saga, and have stuck their neck out to tell stories which have bearing for the world, for the present generation as also for the future generation to come. One such director who has emerged on the firmament with conviction is Amitabha Singh who has in oeuvre The Good Road, which was of the official entry of India at the Oscars in the foreign film category.

Amitabha Singh has come out with another offering SHORTCUT SAFARI which is an invocation for the present generation to start re-looking at the forests in a respectable way or else all else would be lost. SHORT CUT SAFARI has been shot through and through in the jungles of Dang in Gujarat and it could perhaps be one of those rare films which has presented forests in a very different manner than it has been presented so far. Forests in the Hindi films have been associated with dread generally, and it is this notion Amitabha Singh has tried to dispel through SHORTCUT SAFARI and to make the whole project realistic but for a Jimmy Shergill all other characters chosen in the film are those who never had any association with the business of performance arts. Even the parents of the children in the film are real children. Amitabha holds the view that the sense of conscientiousness needs to be brought back into the discourse as in our mad rush for the lucre we have forgotten about ourselves, our families and obviously the nature around us. SHORTCUT SAFARI indeed should inspire more film makers to tread the unconventional path and tell the real stories, which is the premise on which the concept of cinema was based. 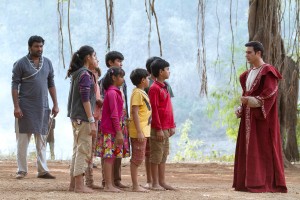