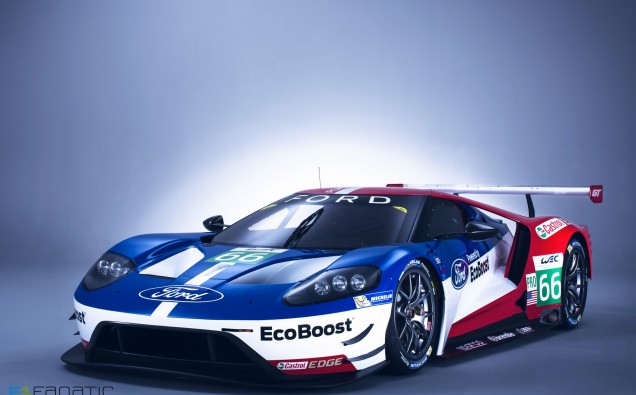 GREATWORTH, UK, April 10, 2017 – The Ford Chip Ganassi Racing team will be on the attack on home ground this weekend when the battle for the FIA World Endurance Championship GTE Pro honours commences at Silverstone. The Ford WEC team is based at Greatworth – just a few miles from the Silverstone circuit – making it a great place to start their 2017 championship campaign.

“With a respectable first season behind us, we are in great shape to start the second WEC season at Silverstone,” said Dave Pericak, Ford Performance global director. “The GTE Pro class is going to be intense, but we have the team ready for battle. We know the competition has been preparing as well, so get ready for some amazing racing.”

The Ford Chip Ganassi Racing team will run its full Le Mans squads in the WEC so everyone is in the groove by the time they get to Le Mans. Billy Johnson (US) returns to join Stefan Mücke (GER) and Olivier Pla (FRA) in the #66 Ford GT for the first three races of the season. Luis Felipe ‘Pipo’ Derani (BRA) joins regulars Andy Priaulx (GB) and Harry Tincknell (GB) in the #67 Ford GT.

“Our goal is to win the championship this year,” said Priaulx. “We need to focus on finishing every race, playing to our strengths and taking the points we need to bring the title home. There is extra motivation in the fact that we are fighting for a World Championship now. The cars are all so equal in the GTE Pro class that I expect some fierce but fair fights on the track this year.

“A top result at Le Mans is vital of course, as there are double points up for grabs. It’s our second year with the car so we have data from all of the tracks, which will help us. The team has had a year to grow and we were so strong at the end of last year. The atmosphere in this team is the best I have ever known so I’m hoping for an exciting season ahead.”

Perhaps the toughest competition for the #67 Ford GT will come from the sister car, the #66 of Mücke, Pla and Johnson.

“We have a clear goal for 2017 and that is to win the championship,” said Mücke. “A good result at Le Mans is important for that but really every race is important. I love racing in the WEC. Of course we have that amazing, intense week at Le Mans but we also get to race at some fantastic tracks all over the world.

“Silverstone is a great place to start the season as you can immediately see how well you have done with your winter development work. The circuit has a bit of everything: slow sections where you need good mechanical grip and high-speed sections with long straights and hard braking zones. The team has gelled very well and our confidence is high. Everyone is still pushing hard to find those tiny fractions of time that can make all the difference to your championship hopes. We enjoy very healthy competition here and we share information between the cars so we are a strong team.”

New for 2017 is the fact that the GT teams are now fighting for World Championships, since the FIA gave full World Championship status to the GTE Drivers and Manufacturers titles. One rule change to look out for is that the teams will have less rubber to use in 2017. Tyre allocation drops from four sets to three sets in practice and from six sets to four sets for qualifying and the race.

“We’ve had a busy winter as we competed at Daytona and Sebring, alongside our regular test and development programme,” said George Howard-Chappell, WEC team principal. “To most, the Ford GT will look the same as it did in 2016 as we are tied by the regulations on what we can and can’t change. As you can imagine though with any professional race team, whatever we can change has been changed. The results started to come for us in the latter part of last season with the wins at Fuji and Shanghai. I’m expecting the racing to be as close as ever this year so we will all have to fight for every inch of track.”

Music that rings and reminds us of our history