A special Great Get Together Ramadan Iftar is to be held in Birmingham on Saturday 17th June 2017, to mark the anniversary of the passing of Jo Cox. 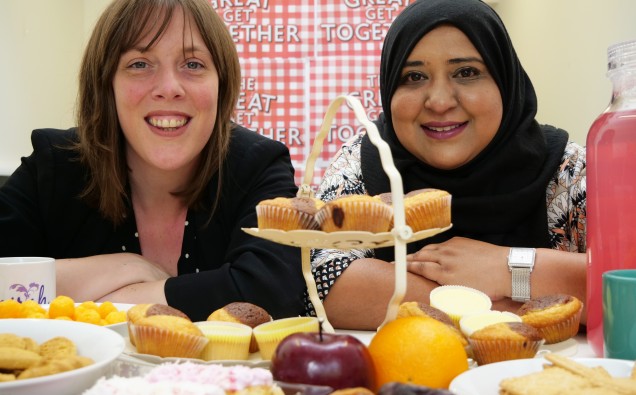 “We are far more united and have far more in common than that which divides us” These were the words of the late Jo Cox MP, in her first speech to parliament. In her memory, the country will be uniting for The Great Get Together , a weekend when communities and individuals from all backgrounds will be joining forces to celebrate what we have in common, standing united against hate and division. In Birmingham, on Saturday 17th June , the Amirah Foundation will be co-hosting a neighbourhood Iftar during Ramadan. This will be an opportunity to meet our neighbours, bring together residents from all
walks of life, and celebrate the life and values of Jo Cox through food, unity and social solidarity in the city. Let’s get together, let’s share food and conversation, and let’s strengthen our community spirit. Bring a dish and make this an evening of unity and joy! Join us for The Great Together in Birmingham on Saturday 17th June. Please arrive at 8.00pm. Food and drink will be provided during the event. The Ramadan Iftar will be held at Oasis Hobmoor Community Centre, Hobmoor Road (corner of Wash Lane), South Yardley, Birmingham B25 8FD from 8pm. If members of the public would like to attend, they must register on eventbrite here: http://bit.ly/thegreatgettogether

This summer, on 16th-18th June, The Jo Cox Foundation is organising the biggest neighbourhood celebrations since the Jubilee street parties. It’s called The Great Get Together and we’d love you to be a part of it. TGGT is inviting people to get together with their neighbours to share food and celebrate all that we hold in common. It could be a street party or a shared barbecue, a picnic or a bake off. What matters is that we have fun and bring communities closer together. The Great Get Together is inspired by Jo Cox, who was killed on 16th June last year. We believe there is a groundswell of people who reject divisive politics and simply want to bring our communities together and celebrate all that unites us. This is our chance. The Amirah Foundation has teamed up with West Midlands Labour, Arts in the Yard, Al-Khair Foundation and Oasis Hub Hobmoor, to host a special Ramadan iftar gathering, allowing Muslims and non-Muslims to come together and enjoin in the breaking of fast. To promote the event, a promotional video was recorded and published featuring Shaz Manir from the Amirah Foundation and Jess Phillips, the MP for Birmingham Yardley. Shaz Manir, CEO of Amirah Foundation, said: “The murder of Jo Cox at the hands of a far-right white supremacist racist was an incredibly awful tragedy, one that shook the nation. On the anniversary of her passing, we are coming together to show that her memory and her work inspired unity and togetherness, continues to do so; and that we stand united as communities across the country and will not be divided by hate of any kind.”

Director of Yalghaar: “ I want to show the world a resilient and wonderful country, a country, which chooses hope over fear”

FIND THE PERFECT GIFT FOR EVERYONE THIS EID