British born newcomer K Zie gives you his 2nd single titled ‘’Make You Mine’’ has been released via music powerhouse T Series on the 29th September 2018, in collaboration with Harry Anand Film Production.

K Zie born and raised in South London, home of some of the most credible singers and celebrities to date such as Stormzy, Kate Nash to UK rap duo Krept and Konan and now Asian Urban Singer K Zie is set to launch on the global stage.   K Zie studied at Whitgift School in Croydon, then went onto Wallington County Grammar School for Sixth form. Whilst studying K Zie had passion for cricket and at the age of 13 and 15 he won the National Cricket cup with Whitgift School. K Zie then went onto represent Surrey County Cricket club from 11 to 17 years of age and was also selected to represent South England at 16.

K Zie was on track to have a career in sports but also had many desires and wishes including music but never thought his dream would become real.  At this point K Zie attended Point Blank Music College (Martin Garrix to Leona Lewis to Arjun have studied there) to further develop his singing and song writing skills.

K Zie commented ’’After months of hard work I am very excited to announce I will be working alongside awarding-winning music producer Harry Anand and T Series. We collectively plan to hold nothing back and are set to announce more music projects for my fans’’

K Zie is set to globally launch his career with the best in the game, it is the most exciting place to be for any artist, K Zie has excelled in the last year learning and developing around strong team of creative people from the industry. 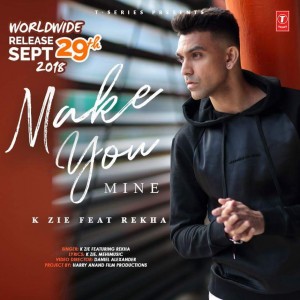