ABRAHAM LINCOLN, JFK, MARTIN LUTHER KING, PRINCESS DIANA… A forthcoming film based on true events immediately prior to Gandhi’s assassination is bound to add his name to the ever-growing...

A forthcoming film based on true events immediately prior to Gandhi’s assassination is bound to add his name to the ever-growing list of conspiratory deaths that appear to shape our world.

Next to August 15th, October 2nd and January 30th, are two of India’s most important dates, marking the birth and death of the ‘Father of India – Mahatma Gandhi’.

This year, the 2nd of October, known as Gandhi Jayanti (birth of Gandhi), will see the release of the teaser of The Gandhi Murder, a full-length feature film, that will question the history and truth, that billions of Indians across the world, believe about Mahatma Gandhi’s death.

71 years after his tragic death at the hands of the Hindu right-wing nationalist, Nathuram Vinayak Godse, ‘The Gandhi Murder’ delves into the political events leading to the assassination that changed the future of Independent India. The film will be released on 30th January 2019, the 71st Anniversary of the assassination.

The Gandhi Murder is a period movie based on true events that led to the eventual assassination of Mahatma Gandhi. The movie demonstrates a violent India, against the backdrop of a non-violent Gandhi, and hard-line fanatic mindsets beginning to grow roots in a country divided on the basis of religion. The movie unravels facts that are bound to trigger the thought that what is conveyed by governments is seldom the full truth, and that politics define what history books write. That both the police and Indian politicians were well aware about the impending assassination, and even knew about the key planners, and yet did not act in time, demonstrates that the assassination was not an act of a single assassin, but a collective plan hatched within the corridors of power of the newly independent India.

The film follows three Senior police officers in different parts of India, who, well aware of the intelligence that Gandhi’s life in under threat, must take key decisions that would eventually either save the Mahatma, or the country.

Starring the great Om Puri in his final on-screen role prior to his death in 2017, American actor Stephen Lang (Avatar, Salem, Into the Badlands) and British talents Luke Pasqualino (Skins, The Musketeers, Our Girl) and Vinnie Jones (Lock, Stock and Two Smoking Barrels, X-Men: The Last Stand), the film will rock the very foundations of India’s political landscaping, questioning not only who really played a role in the murder of the founder of India, and whether this tragedy is another in the long line of political assassinations that has deeper, darker roots. It will also force contemplation on why political assassinations happen, sometimes with the knowledge and blessings of those who matter.

Produced by Dubai-based Nugen Media, The Gandhi Murder releases worldwide on 30th January 2019 and will be distributed by Rising Star Entertainment Ltd. 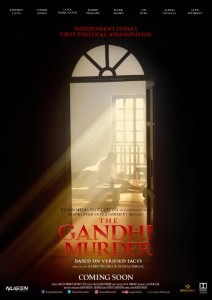 KEEPING A GOOD RELATIONSHIP WITH THE BANK