This year the week centres on the theme ‘because every second counts’ highlighting the incredible care that is delivered daily by Midlands Air Ambulance Charity and the UK’s other... 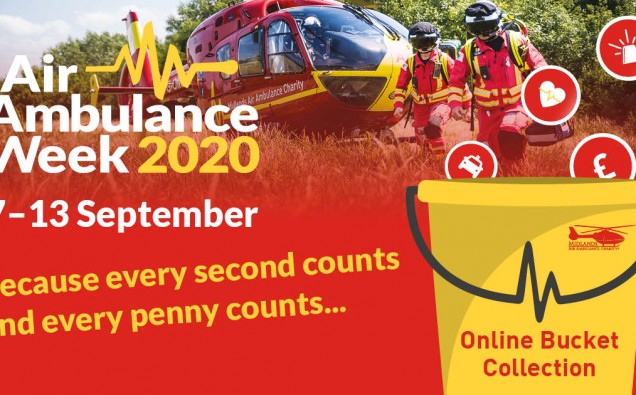 This year the week centres on the theme ‘because every second counts’ highlighting the incredible care that is delivered daily by Midlands Air Ambulance Charity and the UK’s other 21 air ambulance operators.

Throughout the week, Air Ambulances UK will highlight how Midlands Air Ambulance Charity and other regional air ambulance charities save lives every day right across the UK by bringing the emergency department to the incident scene of some of the UK’s most critically ill and injured patients.

Members of the public are being urged to show their support and help the local air ambulance charity to continue providing lifesaving care by donating to Midlands Air Ambulance Charity’s online bucket collection in one of the following ways:

The charity’s specialist team of critical care paramedics, consultant doctors, pilots, engineers, and dispatchers provide vital a rapid response, pre-hospital emergency service, wherever it is needed because every second counts.

Each day Midlands Air Ambulance Charity attends an average of ten lifesaving missions across Gloucestershire, Herefordshire, Shropshire, Staffordshire, the West Midlands and Worcestershire. This means that across the week it will be dispatched to approximately 70 missions.

Despite this, the charity is an emergency service funded almost entirely by you. Your continued support saves the lives of the Midlands most critically ill or injured. Each of the charity’s air ambulance mission costs approximately £2,500 and the critical care car missions cost an average of £224. All missions are entirely funded by donations, as the charity does not receive Government funding.

Since the beginning of the COVID-19 pandemic, air ambulance charities have faced many challenges including a significant drop in donations as the economic effects of the pandemic take hold. Air ambulances across the UK have not only continued to provide lifesaving treatment but have also played a vital role on the frontline response to COVID-19, with many of Midlands Air Ambulance Charity’s crew being redeployed back to NHS roles.

Emma Gray, fundraising and marketing director for Midlands Air Ambulance Charity, says: “Now more than ever, we need your support to enable us to keep saving the lives of the critically ill and injured across the Midlands and in parts of Gloucestershire.

“Since the beginning of the COVID-19 pandemic, we have faced many challenges, including a significant drop in donations as the economic effects of the pandemic take hold. Our crew have not stopped; therefore, we urge that your support for air ambulance charities does not stop.”

To find out more about Air Ambulance Week 2020 or to donate, visit www.airambulancesuk.org or follow #AAW2020 #BecauseEverySecondCounts

For more information on Midlands Air Ambulance Charity, you can visit the website midlandsairambulance.com and follow the organisation on social media.

The Battle of Britain

Dishoom Birmingham – From Bombay with love