Rana Nazir: Battling for women’s rights in Kashmir and the UK

By Aneesa Malik Despite having gone through a difficult time of life, Rana Nazir pressed on to become the founder of the British Kashmiri Women’s Council, alongside her senior...

Despite having gone through a difficult time of life, Rana Nazir pressed on to become the founder of the British Kashmiri Women’s Council, alongside her senior position in the water treatment industry. Her inspiring story begins with her battle for education, where she illustrates perfectly, how powerful an education can be. Rana has gone on to be an advocate for women’s rights in the construction industry as well as for women in Kashmir; winning several awards in her past and paving the way for the future generations.

Rana came from a very close knit family, who gave her unconditional support. “I’ve come from a very beautiful family. My dad was all for education. However at that time, society was not very accepting of their daughters going out to study. I think there was that fear in society that, if we send them out they’re going to become too Westernised. So, it was very difficult to explain the concept of education, whereas now, it’s much easier.”
At the age of 18 Rana was married to a man she barely knew and was adamant it was not the life for her. “I went through a very difficult period in my life and I tried to explain to people that it wasn’t for me. I felt I was far too young; I hadn’t grown up.”

Rana faced an uphill battle which began on her wedding day. “Through those obstacles, I became ill; I became paralysed for around 3 years. But it was during that time, I became strong; I forgave and didn’t hold any grudges. They didn’t mean any harm, I know they thought what they were doing was right.”
Once Rana had adjusted her mindset, things started to come together. “When I was looking after some relatives in Leeds, I realised I wanted to start studying at a university there, which I knew was going to be a challenge in itself. It was about getting peoples acceptance and eventually I did. I managed to get three degrees in total, including my Masters. I ended up working with some amazing Blue Chip companies and worked abroad.”

Not only did Rana go against the norm of her local community by attending university, but she went in to a career dominated heavily by males. “My dad preferred me to do medicine, but I came to a point in my life when I thought, why can’t a woman do science and technology.”
“My first job was in refrigeration, was largely on the production side. It was very male dominated. A lot of the times, you’re out on site, with your hard hat and they think, ‘Oh a woman’s come!’ So you have to be able to hold yourself through your mannerisms. Commanding that type of respect is very important. 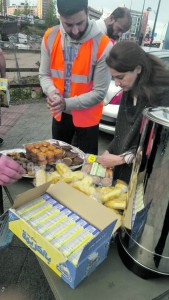 Having established a successful career, Rana felt it was just as important to fight for freedom for her sisters in Kashmir.

“My father, alongside many older gentlemen in Birmingham fought for Kashmir, and when I was younger I would make the flags for him to go and protest on the streets. I used to hear the stories of Kashmir and they were devastating! A lot of times they would hold back, because they were talking about issues of rape. I realised that there were no women representing these atrocities that took place, so I wanted to continue that legacy of our homeland. That’s when I decided to create the British Kashmiri Women’s Council. ” The organisation focuses on the local community as well, mentoring, giving food to the homeless and much more. Rana believes, “It’s about pulling and empowering women. We see someone and think, ‘I don’t want her competing with me’, but we need to pull these women up and put them in places where tomorrow if we need something, that person will benefit the community and you.”

Rana feels very passionately about the Kashmiri siege and is desperate for change. “This occupation has been going on for almost 70 years and one of the things that we need is a different tactic. We will protest until the cows come home and all it will do is flare anger and create negativity. Would you send your child to school or college, knowing they may not return home? It’s easy for us in the West to say, ‘Be strong, do what you want’.

“What we need to do is get women empowered, through social enterprises and business. We talk about human rights- for example, a boy who got shot. You cry for a day and it’s forgotten. But when I mention money, you’re more likely to listen. If they think of trade, the whole divide will be forgotten. Don’t focus on the problem; we need to focus on the solution.”