The United States of America suffered its worst ever mass shooting on 1 October, after lone gunman Stephen Paddock opened fire at a country music festival in Las Vegas.... 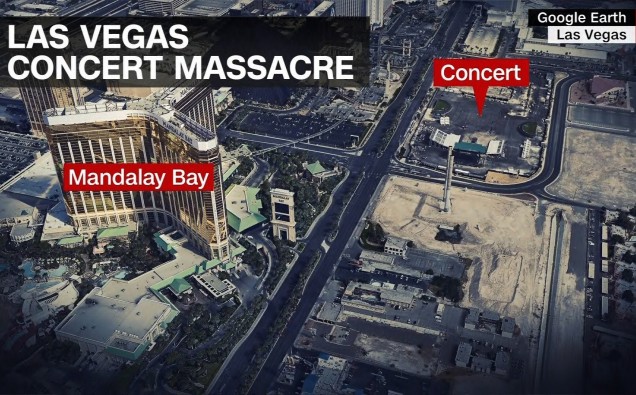 The United States of America suffered its worst ever mass shooting on 1 October, after lone gunman Stephen Paddock opened fire at a country music festival in Las Vegas.

With at least 59 people confirmed dead and over 500 injured, it’s the deadliest massacre in US history, surpassing the 2016 Orlando nightclub shooting, where 50 people were killed and 58 people were injured. Unfortunately, due to the lack of gun control laws in the US, on average there is more than one mass shooting for each day, according to figures from the Gun Violence Archive.

As soon as the news of the Las Vegas shooting broke, people took to social media to speculate on the identity and motive of the suspect. The image of a radicalised Muslim shooter would easily fit the Islamaphobic narrative that is all too prevalent in the media following the string of terrorist attacks carried out by ISIS, yet people were surprised to find that the perpetrator in the Vegas shooting was a 64 year old white male, with no known religious affiliations.

Several official sources, including Las Vegas authorities, refrained from describing the shooting as a terrorist attack, which begs the question: if the gunman was anything but white, how different would the media reaction be? Piers Morgan, who is no stranger to controversial opinions, tweeted the day after the attack: “If the shooter was Muslim, we’d call this a terrorist attack. This was a terrorist attack, committed by a 64-year-old white American. #vegas.” Although the motives behind the attack remain unclear, the fact of the matter is that this was an act of terrorism, carried out by a terrorist. Under federal law, domestic terrorism includes activities that “involve acts dangerous to human life that violate federal or state law.”

The way Paddock carried out the attack showed premeditation and sophistication. He fired multiple rounds from a suite on the 32nd floor of a resort on the Las Vegas Strip, aiming at the hundreds of unsuspecting concertgoers that had gathered for the Route 91 Harvest festival. Law enforcement officials seized over 20 firearms, half of which were semiautomatic rifles legally modified to act as automatic ones with the use of bump fire stock.

Many public figures have expressed the need to not only label the incident as a terrorist attack, but to change the gun laws in order to prevent more shootings in the future, and quite a few have cited Australia as an example: the country’s gun laws were reformed in 1996 after 35 people were killed during the Port Arthur massacre, and there haven’t been any mass shootings since. American singer Ariana Grande, who was performing in Manchester during the Manchester Arena bombing back in May, tweeted: “My heart is breaking for Las Vegas. We need love, unity, peace, gun control & for people to look at this & call this what it is = terrorism.”

According to figures from the Global Terrorism Database, 126 people have been killed in terror attacks in the UK in the last 17 years. Stephen Paddock killed just under half that figure in only 9 minutes. This is white privilege in action; to shy away from labelling him as a terrorist is to reinforce the notion that terrorist attacks can only be carried out by people with brown skin.