The boxers are set to face off at the King Abdullah Sports City in Saudi Arabia  As a tradition in boxing, there has been a war of words between... 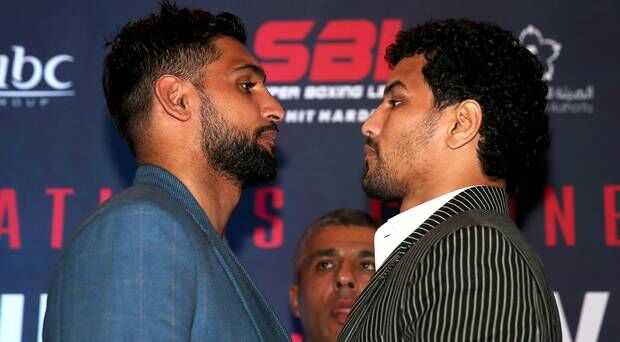 As a tradition in boxing, there has been a war of words between both boxers. Following Pakistan’s defeat to India at the cricket World Cup, Amir Khan tweeted, “Pakistan lost to India today #ICCWorldCup2019 come July 12th I will avenge the loss and knock out Neeraj Goyat on our upcoming fight in #SaudiArabia.” Goyat responded to this when talking to IANS and stated: “Keep dreaming, you will be standing there to witness my victory.”

Amir (33) is the favourite to win this match. He has previously won the IBF title in 2011 and held the light-welterweight WBA title from 2009-2012. He’s stated that he needs to be his best when going against Goyat, referring to the former unified world heavyweight champion Anthony Joshua’s defeat to Andy Ruiz Jr, which has been described as one of the ultimate upsets in boxing history.

Goyat’s recent matches have shown that he is on good form, of his 16 fights in the pro circuit, he has won 11, lost 3 and drawn 2. He has requested for a sparring partner who has a similar style to Amir. When discussing his preparations for the match and going against a boxer with Amir’s stature, Goyat stated, “I am looking for someone who fights the way he does but apart from that there is not much difference (in his training). I am going through the same routine that I would for any other 12-round bout.

“It is not necessary that he will be performing on the same level that he was when he was young. He has achieved a lot in his career, but he is also ageing. I have fought with Olympians and world champions before, so this isn’t exactly new to me. So yes, I am fighting a big name, but I am not overawed by it.”

The match will receive attention internationally, which is good for the boxing scene in both nations. Goyat commented on this level of exposure in saying, “It is good for both professional and amateur boxing in the country that bouts like these happen. It gives Indian boxing, especially pro-boxing, more exposure on an international level. In the amateur circuit, the likes of Mary Kom have raised India’s standing in the world, but we have not had that kind of success in the pro circuit. India used to be known as a country filled only with amateur boxers and not pros.

“That is not the case anymore, and getting big bouts like these will raise our name on the international stage. For example, the Philippines as a country is so much smaller than India, but it is known throughout the world because of Manny Pacquiao and because of that their pro boxers are getting good bouts with big prize money. So these sort of fights should keep happening not just for me but for other Asian pro boxers.”