Motorpoint has returned to the small screen with a new heavyweight national TV campaign. The UK’s largest independent car retailer, which has a network of branches throughout England, Scotland... 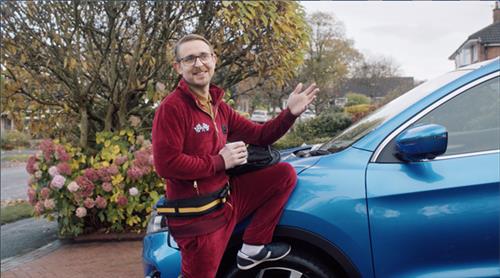 Motorpoint has returned to the small screen with a new heavyweight national TV campaign.

The UK’s largest independent car retailer, which has a network of branches throughout England, Scotland and Wales, is back on air from Boxing Day onwards with its new ‘Buy Happy’ message.

Motorpoint has partnered with MediaCityUK based Production company, Chief and London marketing agency, Cubo to create a brand new TV commercial for broadcast on Channel 4, ITV, Sky and selected cinemas site across the UK.  An adapted version has also been created exclusively for digital platforms.

Starring Brian and Sarah, the new advert, which was partly filmed at the Motorpoint branch in Widnes, forms part of a wider campaign by Motorpoint to promote all the reasons why customers can BUY HAPPY at Motorpoint.  All cars at Motorpoint are under three years old, under 25,000 miles, under warranty and they all have the best prices guaranteed with Motorpoint’s Price Promise*.

Mark Carpenter, Chief Executive Officer of Motorpoint, explained: “We are delighted to be returning to TV with our new ‘car buying made easy’ proposition and we are extremely confident that our ‘Buy Happy’ advert, created with Cubo and Chief, will bring this perfectly to life on the small screen from Boxing Day onwards.”

To coincide with the launch of the new TV commercial, Motorpoint will also be running 10 and 30 seconds adverts on numerous commercial radio stations as well as an integrated digital display campaign.