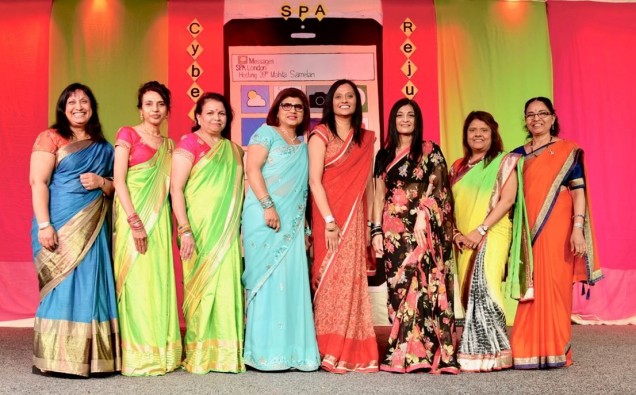 Held at SPA Leicester Hall, the Samelan was a sell-out with over 1050 attendees – over

950 ladies from 14 different U.K. cities and towns. It was hosted by SPA London who

The morning session was a welcome dance followed by keynote speakers. Vinodbhai Mandora

and Samantha Hancock Cyber Protect Officer of Leicestershire Police enlightened the audience on the simple steps that can be taken to tighten the security on ones computers, mobile tablets and phone, etc. Lunch for 1050 attendees was preceded by elections of the Mahila committee, which serves for 2 years.

The afternoon session by led by London’s Vanitaben who discussed the difficulties of modern parenting. She explained how she has to plan her hectic day as an ambitious working mother of four kids.

The second presenter, Pradipbhai, a retired financial expert and management consult from East London, gave a talk on Social Media and challenged whether it was ‘social’. He gave example of how today’s family do not have time to talk to each other although they are sitting in the same room as they are all very ‘busy’ on their mobile phones.

Our third speaker was a very learned lady, Madhviben Haria who is Kendriya Karyawahika

(National General Secretary) for Hindu Sevika Samiti in UK and also a mother of 3 kids as well a yoga teacher. She encouraged all to make time to spend with our kids so that we can instil our cultural values at young age.

The forth speaker was Bipinbhai who is a very successful entrepreneur based in Leicester and he covered the parental accountability. He shared his personal experience of making a special effort to connect with his son to instil moral and cultural values – something that will be valued for life. The program finished with the National Anthem before 10 coaches left for their various destinations.