German Doner Kebab has been crowned king of the capital having been named the number one place to eat in London, according to TripAdvisor. The chain has several outlets... 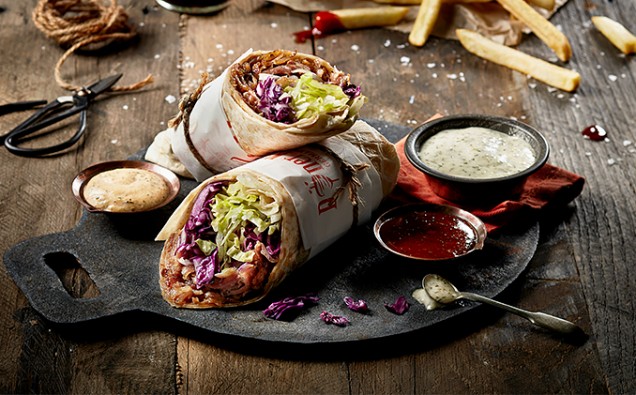 German Doner Kebab has been crowned king of the capital having been named the number one place to eat in London, according to TripAdvisor.

The chain has several outlets in the Midlands including Birmingham and Leicester.

However, the Fulham Broadway branch now sits comfortably on the throne as the capital’s best Quick Bites restaurant among Londoners.

Visitors to the fast-casual restaurant have been raving about the mouth-watering doner kebabs and sides that include flaming fries, doner nachos and doner spring rolls.

But it isn’t just London that has fallen in love with GDK’s delicious gourmet offerings. Cities across the UK and beyond are enjoying everything the halal restaurant has to offer.

German Doner Kebab is now one of the UK’s fastest growing restaurant chains with 34 outlets opened over the past two years.

Weekly sales are reaching £1m and plans are well under way to open a further 14 new stores by the end of the year.

These include Oldham, Bradford, Northampton, Walsall, Newcastle, Edinburgh and Aberdeen.

GDK CEO Imran Sayeed said: “I am thrilled German Doner Kebab has officially been recognised as the top place to eat in London as it is undoubtedly one of the most vibrant cities in the world and boasts an unrivalled mix of eateries.

“You could dine in London every night for the rest of your life and still not even be close to getting around to every single restaurant its streets have to offer. This outlines the magnitude of this achievement for the entire brand.

“This magnificent number one ranking showcases that German Doner Kebab has something to suit every taste and budget in every single city.”

There are plans to expand into Saudi Arabia, too. The Ajlan and Brothers Group has been signed-up as the master franchisee, with a development agreement of 100 stores over the next ten years.

Further growth has been announced in North America. Franchises have been signed in Vancouver, Ottawa, Toronto and Montreal. Negotiations are underway to open outlets in New York’s Manhattan and New Jersey in the USA.

One of the USA’s largest franchise operators has also signed a development agreement for an initial 12 GDK outlets in Houston, Dallas and Las Vegas which will be rolled-out over the next two years.