Zee5 Global Brings You The Rrroar Of S.S. Rajamouli’s RRR In The Original Language, Telugu 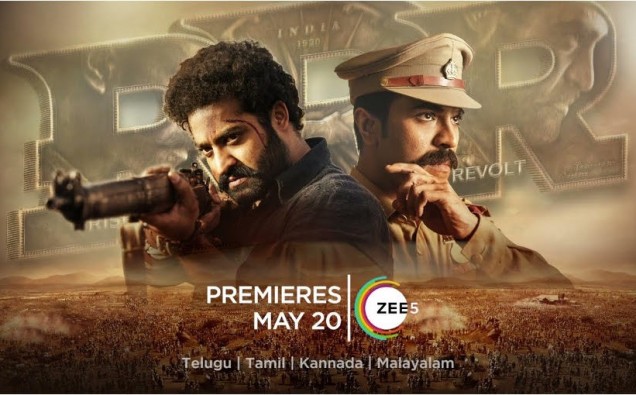 ZEE5 Global, the world’s largest platform for South Asian content has been continually bringing a wide variety of content in various formats in Telugu, Tamil, Kannada, Malayalam, Hindi, Marathi, Gujarati, Bengali and other languages for its global audiences. This much-loved platform is now all set to exclusively premiere RRR in its original language, Telugu, and also in Tamil, Malayalam, and Kannada with English subtitles.

A glorious homecoming for many fans, RRR is a roaring, rearing, rousing mix of genres that center around two Indian revolutionaries and their fight against the British rule in 1920. Headlined by Ram Charan, N.T. Rama Rao Jr., in lead roles, the film is produced by D. V. V. Danayya of DVV Entertainment, and features Ajay Devgn, Alia Bhatt, Shriya Saran, Samuthirakani, Ray Stevenson, Alison Doody, and Olivia Morris in pivotal roles.

Viewers across the world can now watch the blockbuster film in the best 4K quality and with Dolby Atmos straight from the comfort of their homes.

The film will release on the platform on May 20th as a tribute to the widely loved actor, N.T. Rama Rao Jr. on his birthday.

Archana Anand, Chief Business Officer, ZEE5 Global said, “At ZEE5 Global, we constantly look to bring the best stories from South Asia to the world. Today, we are delighted to bring our global audiences yet another blockbuster film- S.S. Rajamouli’s RRR. Bringing alive the true essence and real feel of the film, the movie will be available exclusively on ZEE5 in its original language, Telugu, and also in Tamil, Malayalam, and Kannada along with English subtitles, and is a must-watch for any movie buff.”

Along with RRR, viewers can also watch other blockbusters like the much talked-about film, The Kashmir Files (available in select global markets including US, Australia and streaming from May 25th in UK), Amitabh Bachchan-starrer Jhund, Attack Part 1, Bangarraju (Telugu) and much more, and at a limited period 40%+ discount offer on the Annual pack.

RRR will be available for streaming as part of ZEE5 Global’s premium subscription packs from 00:00 hours (IST) on May 20th.