Following the release of an interim report by the United Nations Fact Finding Mission calling for Min Aung Hlaing and other senior generals to be investigated and prosecuted for... 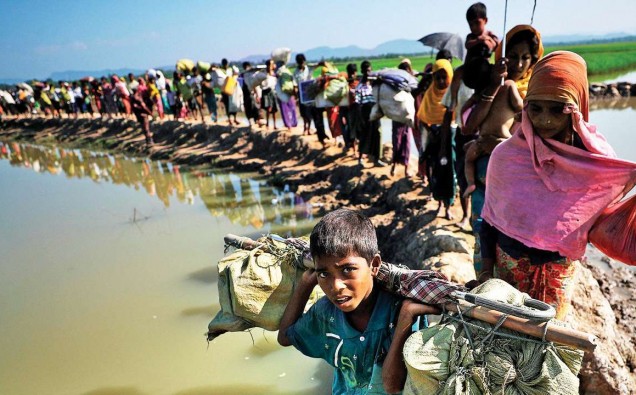 Following the release of an interim report by the United Nations Fact Finding Mission calling for Min Aung Hlaing and other senior generals to be investigated and prosecuted for the crimes of genocide, crimes against humanity and war crimes, Burma Campaign UK repeated its call for the British government to support referring Burma to the International Criminal Court (ICC).

The Fact Finding Mission stated: “Myanmar’s top military generals, including Commander-in-Chief Senior-General Min Aung Hlaing, must be investigated and prosecuted for genocide in the north of Rakhine State, as well as for crimes against humanity and war crimes in Rakhine, Kachin and Shan States.”

To date, despite overwhelming evidence of violations of international law against the Rohingya, calls from over 100 MPs in the British Parliament, and from Rohingya organisations and refugees, the British government has refused to support referring Burma to the International Criminal Court.

Britain leads on Burma at the UN Security Council (which would have to refer Burma to the ICC) so is the key decision maker on this issue. Other countries are waiting for the UK to take the lead. The British Foreign Office has cited lack of consensus as the reason for not supporting a referral, but as they currently do not support a referral, there are no efforts being made to build a consensus.

Burma Campaign UK argues that if the British government were to support a referral and then work to build a global consensus of countries and international bodies in support, this would have the best chance of overcoming a potential veto from China. The process of many countries coming out in support of an ICC referral would also start to erode Min Aung Hlaing’s sense of impunity and could help prevent further atrocities.

“It is simply not credible for the British government to claim it supports justice and accountability and then refuse to support referring Burma to the International Criminal Court, which was specifically set up for cases like this,” said Mark Farmaner.

Instead of backing an ICC referral, the British Foreign Office is backing a farcical enquiry established by Aung San Suu Kyi.

Rosario Manolo, the head of Aung San Suu Kyi’s enquiry, has stated: “I assure you there will be no blaming of anybody, no finger-pointing of anybody … It is not a diplomatic approach and a very bad approach to be doing finger-pointing, blaming, to say ‘you’re accountable’.”

Kobsak Chutikul, a retired Thai lawmaker and diplomat who resigned from the implementation committee, stated “This just goes on and on. Next year, it will be another commission, another board. It is all for show — there is nothing real. It is a hoax.”

Aung San Suu Kyi’s enquiry does not cover crimes committed by the Burmese military against other ethnic groups, in particular, most recently in Kachin and Shan States. The UN Fact Finding Mission stated that crimes committed in these states constitute “crimes against humanity and war crimes.”

British government support for a newly proposed mechanism for collecting evidence for future prosecutions is of course welcome. However, in the context of their refusal to support referring Burma to the ICC or impose targeted sanctions on the military, it also appears like a soft option being seized on in order to be seen to be doing something, and counter criticism over their weak approach.

“Theresa May needs to reconsider the government’s response to this crisis,” said Mark Farmaner. “First the British government did nothing to prevent this happening, and now it is failing to take effective action in response. It doesn’t get worse than genocide, and this is happening on her watch.”

Myanmar’s top military generals, including Commander-in-Chief Senior-General Min Aung Hlaing, must be investigated and prosecuted for genocide in the north of Rakhine State, as well as for crimes against humanity and war crimes in Rakhine, Kachin and Shan States, a report by the UN Independent International Fact-Finding Mission on Myanmar.

The Mission, established by the UN Human Rights Council in March 2017, found patterns of gross human rights violations and abuses committed in Kachin, Rakhine and Shan States that “undoubtedly amount to the gravest crimes under international law”, principally by Myanmar’s military, the Tatmadaw, but also by other security forces.

“They are shocking for the level of denial, normalcy and impunity that is attached to them. The Tatmadaw’s contempt for human life, integrity and freedom, and for international law generally, should be a cause of concern for the entire population.”

The Mission also concluded, “there is sufficient information to warrant the investigation and prosecution of senior officials in the Tatmadaw chain of command, so that a competent court can determine their liability for genocide in relation to the situation in Rakhine State.”

“The crimes in Rakhine State and the manner in which they were perpetrated are similar in nature, gravity and scope to those that have allowed genocidal intent to be established in other contexts,” the report states. “Factors pointing at such intent include the broader oppressive context and hate rhetoric; specific utterances of commanders and direct perpetrators; exclusionary policies, including to alter the demographic composition of Rakhine State; the level of organisation indicating a plan for destruction; and the extreme scale and brutality of the violence.”

The Mission has drawn up a list of alleged perpetrators as priority subjects for investigation and prosecution, whom it believes had effective control and bear the greatest responsibility. Responsibility starts at the top, with the Tatmadaw Commander-in-Chief Senior-General Min Aung Hlaing.

“The State Counsellor, Daw Aung San Suu Kyi, has not used her de facto position as Head of Government, nor her moral authority, to stem or prevent the unfolding events in Rakhine State,” the report states.

“Impunity is deeply entrenched in Myanmar’s political and legal system, effectively placing the Tatmadaw above the law,” the report states, adding that justice has, therefore, remained elusive for victims in the country for decades. “The impetus for accountability must come from the international community.”

The Mission called for the situation in Myanmar to be referred to the International Criminal Court or for an ad hoc international criminal tribunal to be created. In the interim, it called for an independent, impartial mechanism to collect, consolidate, preserve and analyse evidence of violations. It also recommended targeted individual sanctions against those who appear to be most responsible.

The report states that the massive violence and consequent mass exodus sparked by the events of 25 August 2017 – when the armed group, ARSA led attacks on military and security outposts across northern Rakhine State and the army responded with massive force – was “a catastrophe looming for decades”. The report notes that this was the inevitable result of “severe, systemic and institutionalised oppression from birth to death” and an exclusionary vision, including the persistent denial of citizenship and severe restrictions on freedom of movement. Against this backdrop, the violence in Rakhine State in 2012 created the conditions that led to large-scale violence in 2016 and the human rights crisis that unfolded in 2017.

The Mission documented mass killings, the scorching of Rohingya settlements and large-scale gang rape and other sexual violence by Tatmadaw soldiers. The poignant testimony of one survivor laid bare the monstrous extent of sexual violence: “I was lucky, I was only raped by three men,” she said. Rapes were often in public spaces in front of families, including children. The Mission also met many children with visible injuries matching accounts of being shot, stabbed or burned. Satellite imagery corroborates accounts of widespread, systematic, deliberate and targeted destruction, during which Rohingya populated-areas were burned down with nearby ethnic Rakhine settlements left unscathed.

“The Government and the Tatmadaw have fostered a climate in which hate speech thrives, human rights violations are legitimised, and incitement to discrimination and violence facilitated,” the report states. The Mission found numerous examples of hate speech and incitement to violence, including when in November 2012 a leading Rakhine political party cited Hitler, arguing that “inhuman acts” were sometimes necessary to “maintain a race”.

The security forces’ response to the ARSA attacks in August 2017 started within hours, “was immediate, brutal and grossly disproportionate”, suggesting “a level of preplanning and design” consistent with Commander-in-Chief Min Aung Hlaing’s stated vision to finish “the unfinished job” of solving “the long-standing Bengali problem”. The Mission also found that a large build-up of troops and other military assets across northern Rakhine had already begun in early August 2017.

The report also highlights serious human rights violations by security forces against the ethnic Rakhine, including sexual violence, noting that the pattern of violations against them is highly underreported.

In Kachin and Shan States, the Mission verified a number of incidents in the context of armed conflicts, confirming consistent patterns of violations of international law. The report finds that Tatmadaw operations in northern Myanmar are “characterised by systematic attacks directed at civilians” and conducted “in flagrant disregard for life, property and well-being of civilians.”

Such attacks catalyse a wide range of other violations, including killings, sexual violence, arbitrary arrest and detention, enforced disappearances, forced labour, land grabbing, and the burning of villages. Tatmadaw operations have a devastating impact on the population.

The Mission also confirmed that violations and abuses were committed by non-State armed groups. This includes the “ethnic armed organisations” in Kachin and Shan States and ARSA in Rakhine State.

While the Mission was never granted access to Myanmar, the team amassed a vast amount of information from primary sources, including through 875 in-depth interviews with victims and eyewitnesses, satellite imagery and authenticated documents, photographs and videos. Specialist advice was sought on sexual and gender-based violence, psychology, military affairs and forensics. Only verified and corroborated information was taken on board. The Mission travelled to Bangladesh, Indonesia, Malaysia, Thailand and the United Kingdom.

A fuller report, containing detailed factual information and legal analysis will be published and presented to the Human Rights Council on 18 September. It will include a significant amount of satellite imagery analysis.

How to Sell a Business in the UK