When it comes to looking after the iconic Spaghetti Junction, Italian father and son duo Michael Del-Giudice and Lewis know the perfect recipe. The intertwining structure is an integral... 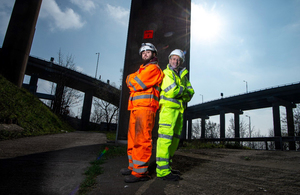 When it comes to looking after the iconic Spaghetti Junction, Italian father and son duo Michael Del-Giudice and Lewis know the perfect recipe.

The intertwining structure is an integral part of England’s motorway network and on 24 May, it will be 50 years since the road first opened to traffic.

More than 200,000 vehicles currently use the junction every day and that means the structure requires constant maintenance and inspection by specialist teams from National Highways to help keep it safe for motorists.

Michael works for National Highways in the Midlands as part of its structures team while his son Lewis works for service provider, Kier Highways. 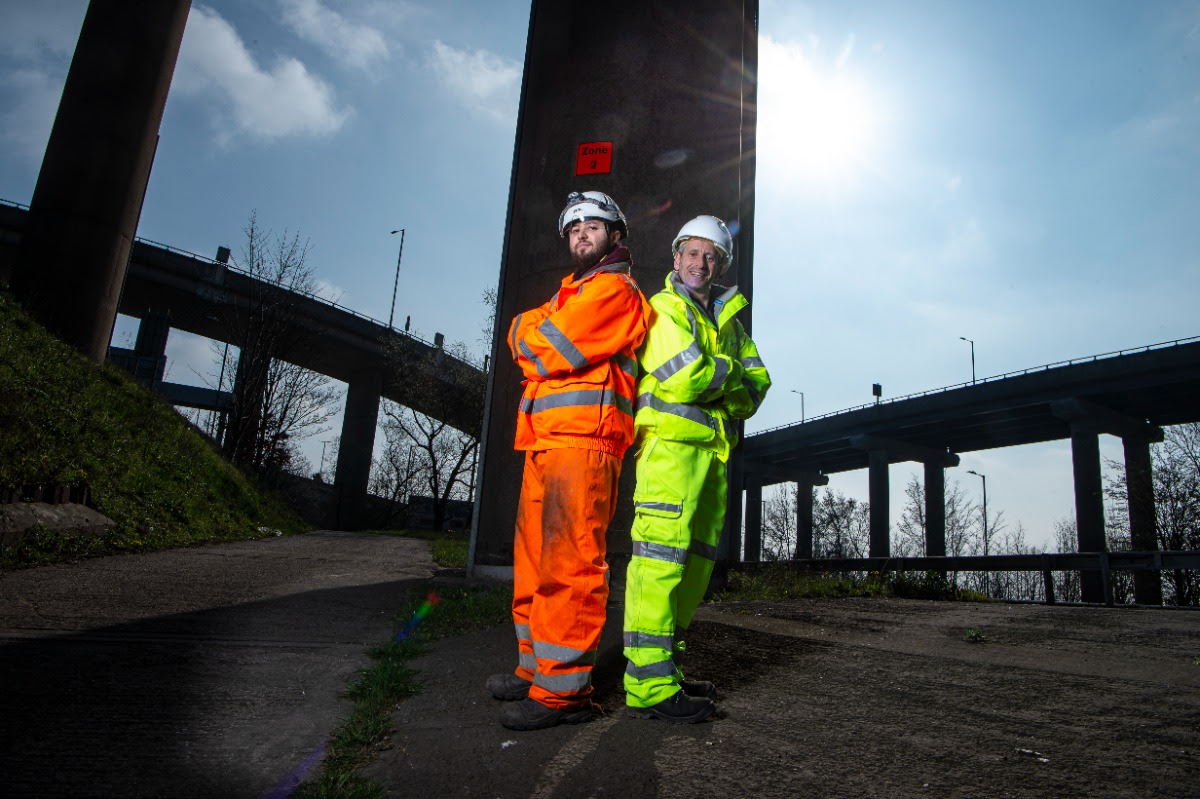 Michael said: “Spaghetti Junction is very much a living and breathing structure and it’s vital that it is protected and maintained.

“If you think of a car being left outside and falling into disrepair for years and then it comes to have an MOT, you will find that it would fail.

“We must make sure that we keep the structure safe and fit for use and that means it is subject to constant maintenance and structures inspections, most of which go unseen to passing motorists travelling on the road above.

“For example, during the recent earthquake in Walsall, we carried out extensive checks to the supporting structural components to make sure there wasn’t any structural damage.

“When you are driving over the M6, it is easy to forget that the road is elevated, and the very nature of its design means it needs specialist maintenance. Safety is always our main priority.” 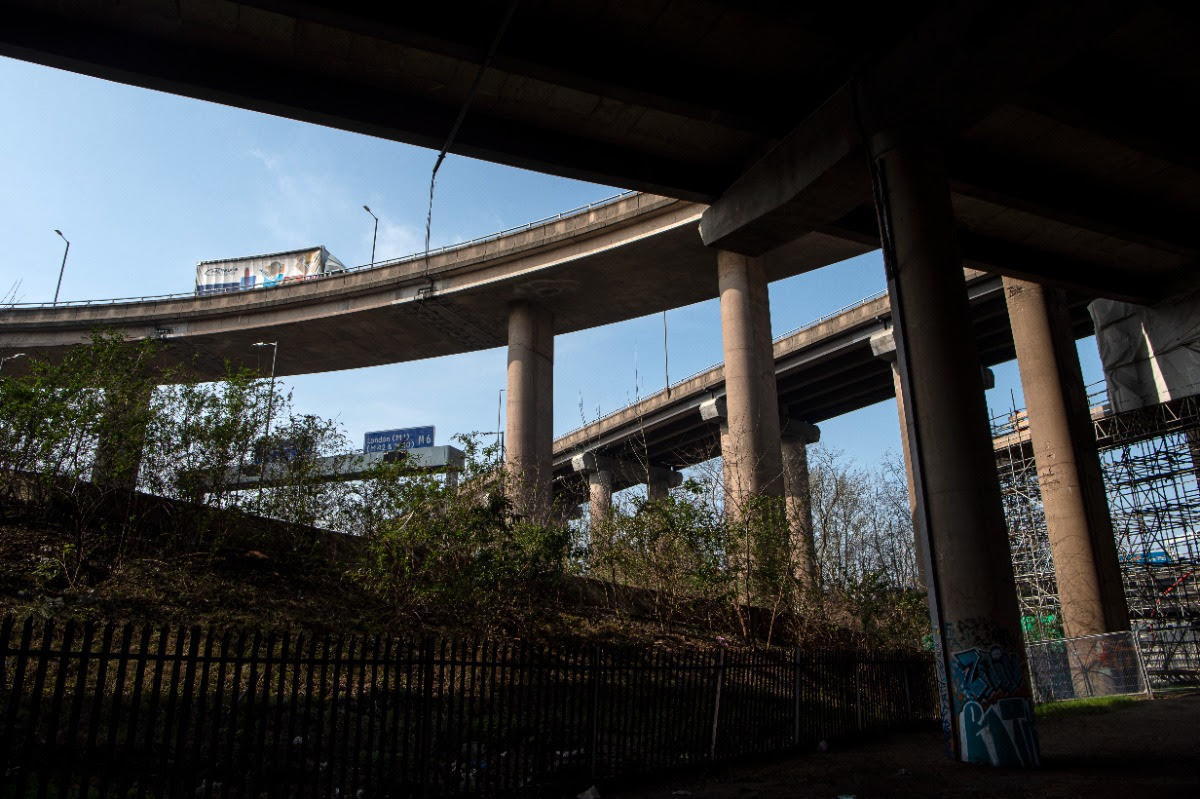 Caption: A lorry travels across Spaghetti Junction in Birmingham elevated high above the ground.

The sprawling design of Spaghetti Junction means there are over 250 spans, crossbeams and expansion joints, more than 600 columns and more than 3,000 bridge bearings.

It is said to be one of the busiest interchanges in Europe with two miles of slip roads sprawling out from the structure while accommodating less than one mile of the M6 itself.

Known officially as the Gravelly Hill Interchange, the junction is an integral part of the ‘Midland Links’ which joins up the M6, M1 and M5 motorways with the A38(M) Aston Expressway so traffic can travel into Birmingham. 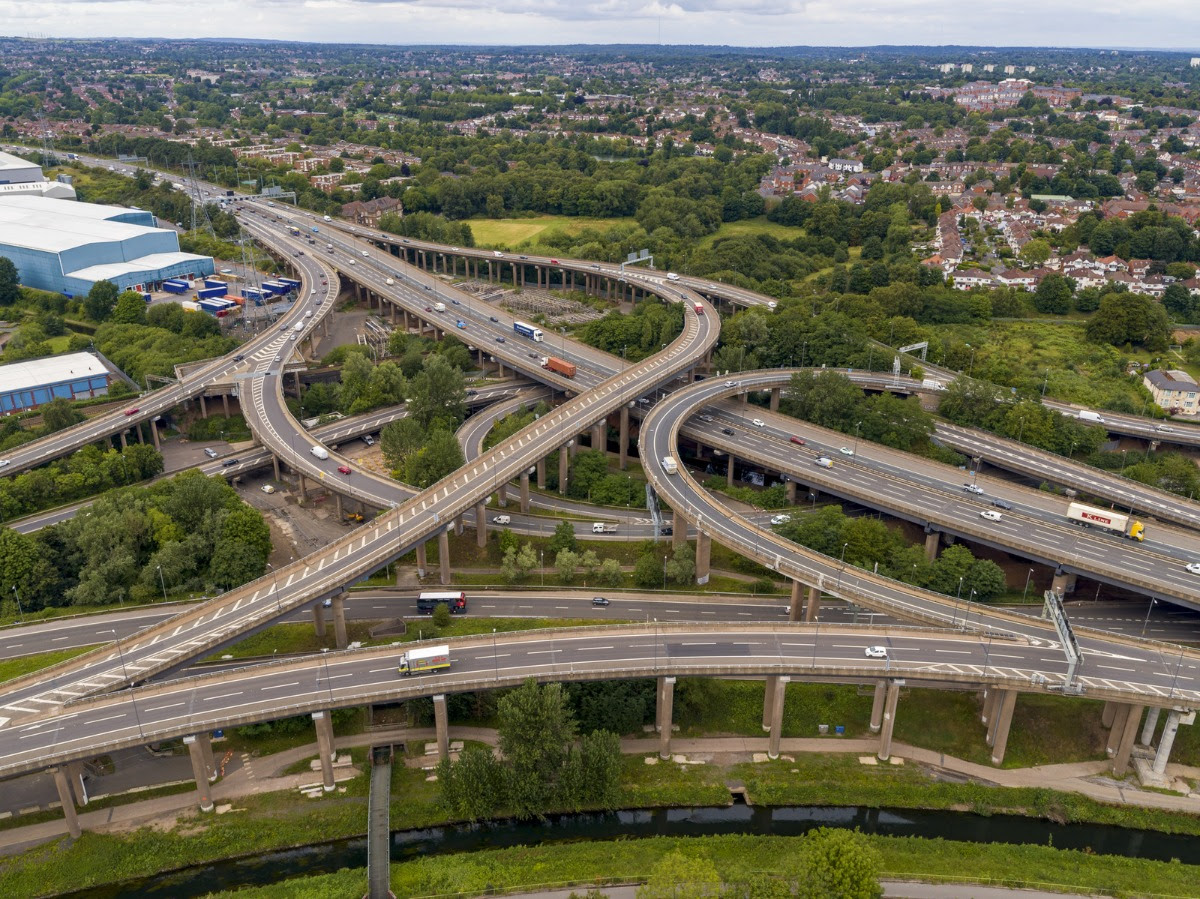 Caption: Spaghetti Junction as seen from above

“The enduring appeal of Spaghetti Junction is the complexity of it all,” adds Michael. “You stand underneath it, and you think the talented Engineer (Sir Evan Owen Williams) had the foresight to design it, then contractors built it and then of course having to maintain it, it is a real feat of engineering.

“It is so important to the city of Birmingham but also to people using the M6 to travel north and south. It is a major part of our infrastructure network in this country and we would be lost without it.” 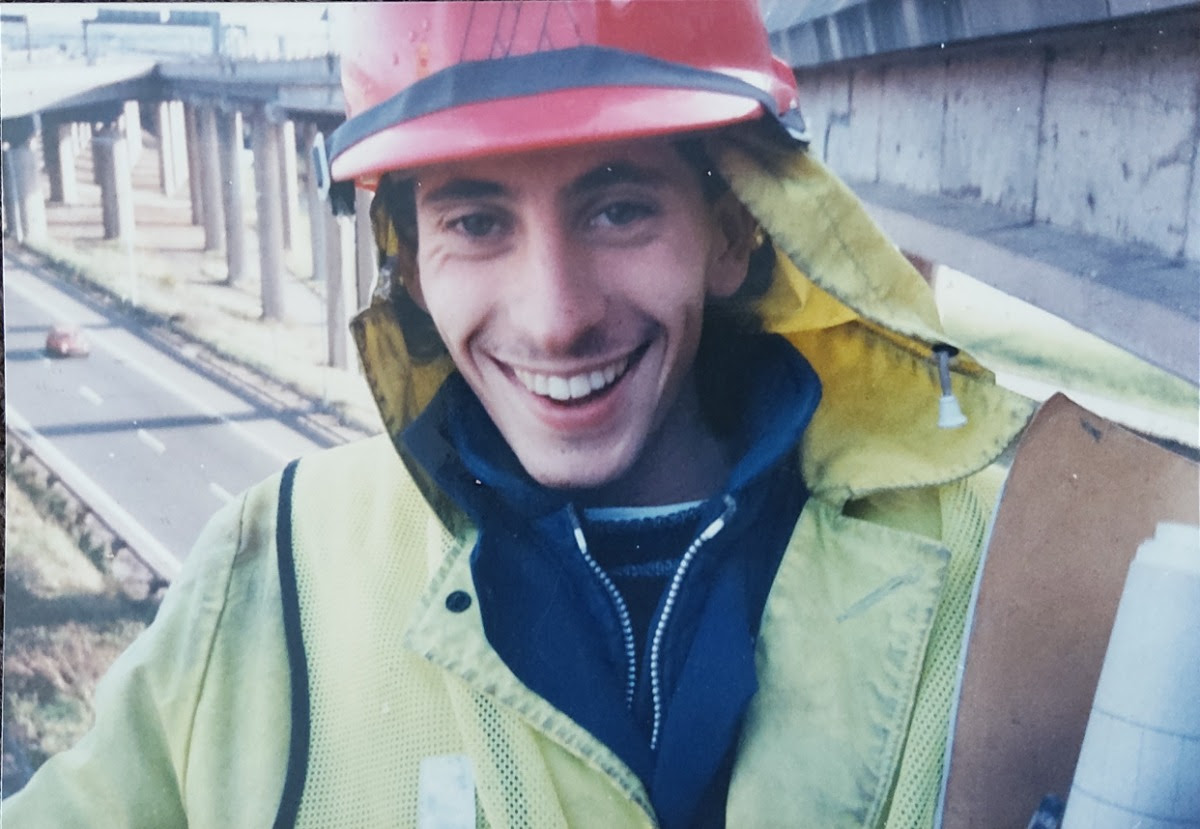 Caption: Michael pictured at Spaghetti Junction on his first ever maintenance scheme.

Father-of-two Michael, aged 55, from Solihull, started working for Maunsell Ltd, who were providing engineering services to West Midlands County Council back in 1985.

Michael says this was “his first proper job” and it’s fair to say the rest is history.

Then just 18 years-old, Michael was part of a structures team and was tasked with delivering inspections and maintenance work after the road had opened.

“I remember being sent to Spaghetti Junction, standing underneath, looking up, and seeing this vast concrete mass above me,” added Michael. “It was just incredible to see the scale of the structure.

“That first experience certainly left an impression on me, and I knew from that moment on that I wanted to continue work in the engineering sector. It really did shape my life.”

Not to be outdone by his dad – Lewis Del-Giudice, aged 29 from Cannock, has also entered the world of structures engineering and following in his father’s footsteps, he also works on the iconic road.

He said: “I really enjoy my job, especially the varied nature of the work. This road is unlike anything else I have worked on, and it is such an important part of England’s motorway network.

“My dad has always been my role model and growing up, he would speak about the road and how important it is to him personally and professionally. It certainly has a special place in our family.” 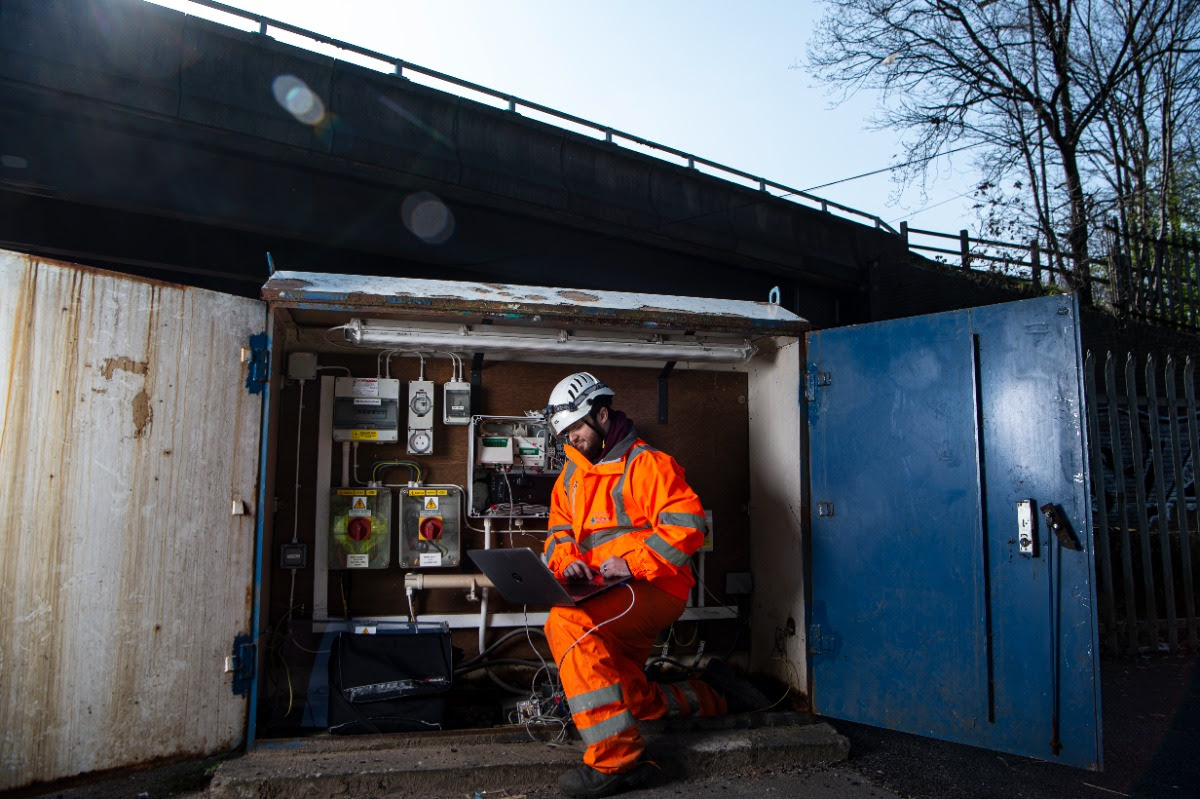 Lewis works as part of a specialist team that monitors the performance of the various cathodic protection systems that are in place underneath the motorway.

Cathodic protection is a process used to provide corrosion protection to reinforced concrete structures such as Spaghetti Junction.

It is a long-established method originally developed in the Victorian period to manage corrosion in maritime vessels.

In its simplest form an electrical power supply – termed impressed current cathodic protection (ICCP) – is used to pass low voltage direct current electricity through surface mounted or embedded anodes into the concrete and then onto the reinforcement.

This means enhanced control of corrosion and helps to extend the life of the structure.

The systems are inspected and monitored to ensure they are functioning properly on a regular basis.

Lewis added: “The cathodic protection work is interesting, and people do not realise the lengths we go to make sure the road is kept in tip top condition. People do not see this crucial aspect of our work when they are driving overhead to get to work or to see friends, but it is part of keeping the road safe. We always do our best to make sure we limit the disruption caused by any repair work.

“There are more than 150 installed cathodic protection systems at Spaghetti Junction some of which are 80ft above ground level. So, you certainly need a head for heights, and I’d say that going to work is something of an adventure because each day brings a new challenge.

“When you are working so high up, you get a unique perspective of the important work you are doing, and it makes you realise how important your role is.

“I’m proud to be doing my bit it to keep the road safe for the next 50 years and beyond.”