Twelve weeks, over 1,100 miles, a quarter of a million golf shots, more than 920 lost golf balls and an estimated 30,000 people trained in life-saving CPR skills. This... 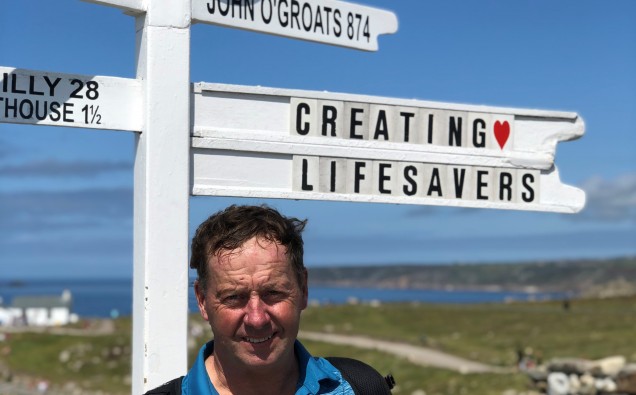 Twelve weeks, over 1,100 miles, a quarter of a million golf shots, more than 920 lost golf balls and an estimated 30,000 people trained in life-saving CPR skills. This is what former Armed Forces trainer, David Sullivan aged 58 from Oxted in Surrey, has accomplished after setting off from John O’Groats in June on a mammoth mission to walk across the UK while hitting a golf ball and teaching people life-saving CPR skills along the way. David arrived at his destination of Land’s End on 22nd August.

David set himself this extraordinary task, which involved walking between 14 and 30 miles every day and camping overnight, to raise awareness of the importance of knowing CPR, and to raise funds that would enable more towns and villages across the country to install life-saving defibrillators.

At every one of David’s stops on his mammoth journey, he trained people how to perform CPR. David’s passion for teaching CPR came about in 2016 when, while playing golf, he was faced with a life-or-death situation. When a young man experienced a cardiac arrest in front of him, David luckily knew what to do. He gave CPR for 17 minutes until the man could be treated with a defibrillator.

“It was thanks to my training, and a defibrillator being nearby, that I was able to help save the man, who luckily made a full recovery,” says David. “When something like that happens right in front of you, it makes you realise how precious life is and how important it is to know what to do in that kind of emergency. It was an experience which profoundly affected me, and now it’s my mission to create an army of life savers all over the country.”

David had hoped to raise £60k, which would mean that 60 locations in Britain could be kitted out with a defibrillator, but at just over £9k, he is hoping that completing his challenge will encourage more people to donate.

“I’m imploring individuals and businesses all over the country to support this endeavour. Until a cardiac arrest happens to you, or someone you know, it’s impossible to truly understand how critical defibrillators are. Being treated with a defibrillator can literally mean the difference between life and death. We saw this recently when Danish footballer Christian Eriksen suffered a cardiac arrest on the pitch. It can happen to anyone at any age at any time. Being treated with a defibrillator increases someone’s chance of survival by up to 70%.”

Donations can be made by visiting www.justgiving.com/crowdfunding/david-sullivan-77.

“David has been on an incredible journey over the last two months and American Golf is proud to have been behind him, encouraging him every step of the way. It’s been fantastic to see the attention that David’s challenge has garnered up and down the country, raising awareness of the importance of knowing CPR, and the enthusiasm that he has shown in training people along his route. Huge congratulations to David on all he has achieved – we hope he now enjoys a well-earned rest having reached his final hole.”