The Army Quick Response Force, Rangers, police and rescuers reached the scene as several houses and vehicles were also destroyed in the incident 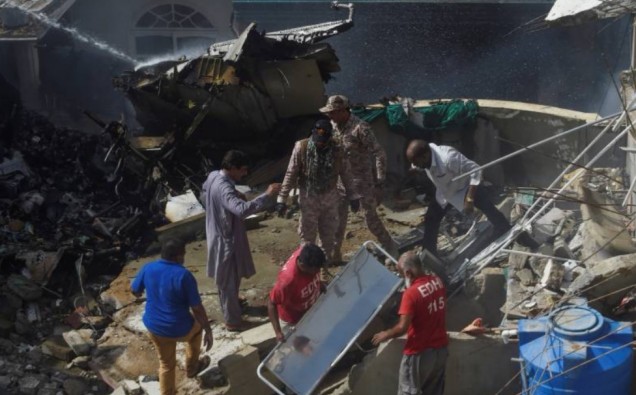 The Army Quick Response Force, Rangers, police and rescuers reached the scene as several houses and vehicles were also destroyed in the incident involving the plane coming from Lahore. The plane, Airbus 320, was carrying 91 passengers and seven crew members.

On the other hand, Bank of Punjab President Masood Zafar was also travelling to Karachi is injured and shifted to the Civil Hospital where his condition is stated to be out of danger. According to initial reports, the aircraft crashed in the Jinnah Garden Area due to a technical fault which was confirmed by the PIA spokesperson. The residential neighbourhood is located in the Malir Cantt adjacent to the Model Colony less than one kilometre from the airport runway.

Before the tragic incident, the captain first informed the air traffic control about developing some technical fault after which the plane vanished from the radar as the contact was lost just a few minutes before the crash. The captain lost control of the plane, the Civil Aviation Authority say.

The plane captain can be heard saying “we have lost engine” after which he repeated “mayday, mayday” during his last communication with the airport traffic controller before losing contact. The Civil Aviation Authority said the Flight No PK-8303 had left Lahore at 1pm and was scheduled to arrive in Karachi at 2:45pm.

PIA spokesperson Athar told 24NewsHD TV channel said the plane was fit [air travel worthy] and all rumours on the issue were baseless. Details about the cause could only be shared investigation by a team comprising the CAA, PIA and Airbus representatives. The TV footage available with the 24NewsHD TV channel showed smoke and destroyed houses with engulfing the buildings and cars. Initial reports suggest that at least eight to ten houses have been ruined in the area.

According to 24NewsHD TV channel, several bodies have so far been recovered and the many injured shifted to different hospitals while over 25 vehicles are either destroyed or damaged. On the other hand, Sindh Chief Minister Murad Ali Shah imposed emergency in all the hospitals and directed the authorities to launch rescue and relief operation. Meanwhile, 17 bodies had so far been shifted to the Jinnah Hospital where it is said the health facility did not have capacity to receive more.

On the other hand, Sindh Chief Minister Murad Ali Shah imposed emergency in all the hospitals and directed the authorities to launch rescue and relief operation. Later, he reached the incident site and reviewed the rescue operation.

CANCELLATION OF THE 2020 SILVERSTONE CLASSIC