China Vs US Trade War  It’s no secret that Donald Trump has constantly chastised the trading practices of the Chinese since he has come into Congress. During Late May,... 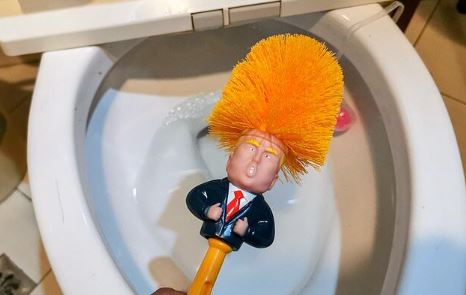 China Vs US Trade War

It’s no secret that Donald Trump has constantly chastised the trading practices of the Chinese since he has come into Congress. During Late May, the US president even went as far as announcing heavy new tariffs on Chinese imported goods being sold in the states.

As a result, the nation raised prices on approximately $200bn worth of Chinese products, from 10% to 25% in total. In theory, this procedure encourages home-buying for US citizens and de-motivates them in purchasing from abroad. It should also help to boost the US economy and the circulation of wealth inside the country’s borders.

Although the two countries are still in talks, China has retaliated against the tariffs by the purchase of hundreds of Donald Trump Toilet brushes, which are being sold to citizens across the web.

The novelty toilet brushes have an uncanny resemblance to the US President. They feature an open-mouthed Trump, wearing a button up shirt suit and red tie. The figurine comes complete with a large head of bright orange bristles, a long handle and even a brush holder.

The items are being sold on the Chinese site Taobao – which is the country’s equivalent to eBay. In recent weeks, they have been faced with a surge of popularity from locals in a bid to support Beijing against US e-commerce.

The Trump toilet brushes cost up to 20 yuan, which is equivalent to £2 in UK currency. One buyer even jokingly commented about how the brush left them surprised at Trump becoming “so useful” in the bathroom. Whereas an online seller was willing to sell the toilet brushes with a free roll of toilet paper thrown into the deal.

Taking the Toilet by Storm

In recent sales, this is not the first time that the toilet brushes have been a hit on the market. They were first seen to gain popularity by an Etsy shop in New Zealand, during November of last year.

Details and descriptions of the product listed online have included:

“I am automatically attracted to toilet bowls, I just start scrubbing, I just kiss, I don’t even wait and when you’re a toilet brush they let you do it. DJT”

I Never Said I Loved You by Rhik Samadder: Book Review