Kiln Theatre presented WHEN THE CROWS VISIT  By Anupama Chandrasekhar 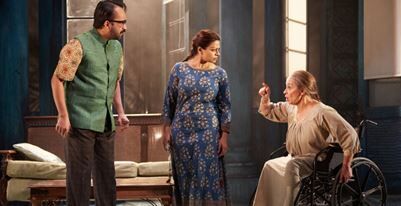 ‘When the Crows Visit’… a dark, hard-hitting play on the theme of a woman’s shades of contempt and cyclical nature of oppression, set in the backdrop of India… the storyline comes alive at the intimate Kiln Theatre London with actors extraordinaire #SoniRazdan #AyeshaDharker especially among all others, and as importantly artistic director #IndhuRubasingham’s direction that is so on point.

Composers and Sound Designers Ben & Max Ringham; Casting Director Briony Barnett have collaborates to create a winner of a theatre production which is a must watch piece of engaging theatre.

…and all the sins of his father and his forefathers came out of his body, through the pores of his skin, in the form of crows.

When a son returns home after being accused of a violent crime, a mother is forced to confront the ghosts of her past… when the crows visit.

Inspired by true events in modern-day India, Anupama Chandrasekhar explores the themes of Ibsen’s Ghosts and the cyclical nature of oppression in a dark and thrilling world première.

Indhu Rubasingham said, “I am thrilled to be working with such a talented cast on Anu’s new play. I first worked with Anu 12 years ago at the Royal Court. She had come through their brilliant international programme. In my opinion, she is the most important voice coming out of India and it is a real privilege to be directing and producing her new play here at Kiln Theatre.”

Bally Gill plays Akshay. For theatre, his credits include Romeo and Juliet, Macbeth, Coriolanus, Salome, Vice Versa, Always Orange, Fall of the Kingdom, Rise of the Foot Soldier (RSC), The Island Nation (Arcola Theatre), A Local Boy (Arts Theatre), Dinner with Saddam (Menier Chocolate Factory) and The Bureau of Lost Things (Theatre503). He received the Ian Charleson Award for his portrayal of Romeo.

Soni Razdan plays Jaya.  Her theatre work includes The Collector, Band Darwaze and Arms and the Man. For television, her credits include Jesus of Nazareth, Padosi, Buniyaad, Aur Phir Ek Din, This Way Up, Good Karma Hospital; and for film, 36 Chowringhee Lane, Mandi, Saaransh, Khamosh, Such a Long Journey, Page 3, No Fathers in Kashmir, Yours Truly, Raazi. Razdan also directs and is currently developing a screen version of Manju Kapoor’s book Difficult Daughters, set around the time of Partition of India.

In a shadowy mansion-house set, a family demonstrates how status, financial power and privilege can rescue from any threats to social reputation. There is an echo of Ibsen’s Ghosts, with a son like Akshay (Bally Gill) who has inherited his father’s streaks of violence towards women, and a mother, Hema (Ayesha Dharker), who with her fierce maternal instincts does all to protect her son at any cost.

When the Crows Visit highlights the issue of systemic sexual assault in India bang on and in a painful way. The acting talent of the cast overall is eloquent and uber impactful so much so that the audiences felt transported and a part of the family turmoil on stage and appeared immersed in the scenes, compelling score of music, words and was almost impressed to feel that one was not in the middle of the protagonists’ life action.

The play is set in an emotionally intense set where the story plays out-very precisely, passionately and perfectly enacted. Three cheers for this production and performance.

The performance is immersive, intense and engrossing in every way. It’s definitely worth watching for its superb narrative and artistic excellence in how it’s staged with an exceptional cast ensemble with multi-dimensional talent reserve. The production quality is very high and the stage set is intimate and along with lighting, music, sound…it’s got all must watch elements!

The theme of the production unfolds with precision in a gripping way. Overall this is a fantastic stage production and the storyline really came alive all very passionately and perfectly enacted punctuated with tense intensity so kudos to the director and actors.

Thug Jailed for 12 Years after Mowing Down Policeman