In a city with millions of inhabitants, there are as many views of Istanbul as there are faces. Firmly embedded between East and West, old and new exchange with... 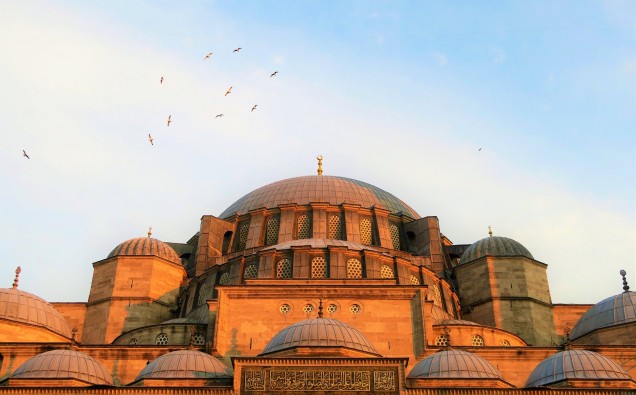 In a city with millions of inhabitants, there are as many views of Istanbul as there are faces. Firmly embedded between East and West, old and new exchange with the winds of the Bosphorus sea, bringing together a unique mix of cultures and civilisations.  A source of inspiration for many an artist and writer, the city has become immortalised in the words of the philosopher poet Allama Iqbal, “Its breeze is holy like the fragrance of a rose, A voice is calling from the tomb of Ayyub Sultan.”

Istanbul is one of the world’s oldest cities where museums and bazaars rub shoulders with palaces and ancient monuments still standing tall after centuries. The mosques, churches and synagogues stand testament to the panoply of ruling empires etched into the urban landscape. Touches of the Roman Empire remain in the obelisks close to the city’s most famous landmarks, the Blue Mosque and the Hagia Sophia. Condensed together in the cobbled streets of Sultanahmet, the area was used in the Byzantine era as a hippodrome once famed for its horse and carriage races.

Despite modernity crouching into the city skyline with high rise buildings, none can compete with the towering minarets of the Suleymaniye Mosque perched high on a hill at the edge of the Bosphorus. Built in the 16th century, it is one of the finest examples of Ottoman architecture made from marble stone and red granite. Legend has it that it’s survived hundreds of earthquakes largely due to its strong foundations laid down years before its walls were built. The surrounding gardens in the complex provide the perfect shelter from the crowds and summer heat under the canopy of trees while admiring the view of the sea below.

Just as ancient as the architecture is the Turkish cuisine, a melting pot of flavours influenced by Roman, Byzantine and Ottoman traditions. Chickpeas and chestnuts roasted by street vendors compete with Turkish bagels available at most street corners. Traditionally eaten in the morning or evening, simit bread encrusted with sesame seeds is perfectly matched with Turkish tea served in small hourglass cups. For those with a sweet tooth, cravings are easily fulfilled with authentic baklava made with generous amounts of butter melted into pastry with walnuts and pistachios.

One of several bridges that divide the city into the ‘new town’ and ‘old town’, a walk over Galata bridge in Eminonu is not complete without a taste of freshly caught fried fish from the Golden Horn and promptly served in baguettes. The bridge leads to the new town section of Istanbul with a younger and more modern feel. Evenings are lit up by shops and street performers on Istiklal Street in the Sisli district. A nostalgic tram ride runs down the length of the street to mark the first electrical tramline in 1913, that has since been overtaken by a modern metro system connected to a newer tramline that connects most of the tourist spots.

For more traditional handicrafts and art, the Grand Bazaar has something to offer everyone with gift ideas and sweet treats to take home. It’s easy to spend a few hours in the city’s oldest bazaar with thousands of small shops in a maze-like structure. The bazaar spills out to the surrounding streets with a short walk to the Spice market. Open baskets of herbs, spices, dried fruit and nuts combine the sights and smells of Istanbul under one roof.

For lovers of the sea, a trip across the Bosphorus is the most picturesque way to cross the city to the East or even a visit to the Princes Islands to swim and explore. Whether it’s for a few days, a few weeks or months, Istanbul is a city that demands to be visited again and again. With two direct flights a day from Birmingham airport to Istanbul, in a mere few hours, another world is waiting to be explored.

Nature’s Fury: The Heaviest Rainfall in Decades Leaves Many Dead in Mumbai