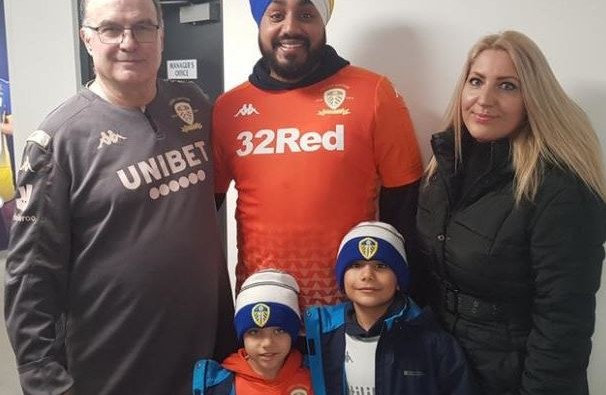 Chaz Singh, a Sikh football fan created a match day turban using the colours of his favourite team, to show how united the sport is.

The 34 year old from Bradford came up with the idea for a Leeds United turban with his kids, Hari and AJ.

He told the PA news agency: “My kids love Leeds as much as anyone could and we all also love our culture and heritage. We were sat in our living room one day when Hari, my eldest, said ‘Daddy, if you love your turban and love Leeds, I’m going to make you a Leeds turban.”

“So he wrapped a Leeds United scarf around my head in the style of a turban. I posted a picture of it on social media and it got a really positive response, and it then evolved from a scarf to a proper turban.”

“The response I got was from everyone, every background, young and old, from Sikhs and non-Sikhs – everyone seemed to understand what it stood for, which is unity.”

Chaz Singh stated that people often ask for pictures with him at matches. He currently has only one turban, however, he is hoping that other people will wear similar turbans in the future.

The turban is created out of several long pieces of cloth in blue, yellow and white that Mr Singh put together himself.

He said: “The turban to Sikhs is like a king’s crown – its part of our identity and we wear it with pride and honour. To be able to mix that with a club I love has been a wonderful experience.”

“To be honest it started out as a bit of fun but has become somewhat of a symbol of the diversity and, more importantly, the unity of Leeds United.”