Néstor Girolami won his maiden WTCC race in very wet conditions at Ningbo International Speedpark in China as Thed Björk has claimed the World Championship lead by a mere... 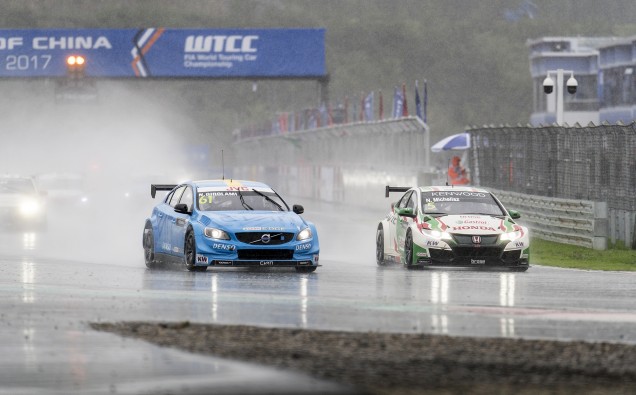 Néstor Girolami won his maiden WTCC race in very wet conditions at Ningbo International Speedpark in China as Thed Björk has claimed the World Championship lead by a mere half point for Polestar Cyan Racing.

Pouring rain all day meant that the main race was started behind the Volvo V60 Polestar Safety Car and later stopped, with Néstor Girolami crossing the line in first position. The regulations state that half points should be awarded under these finishing conditions.

“It is really strange to claim my first WTCC win like this. But it is nonetheless a victory and the team has done an amazing job all weekend. We proved yesterday that we are fastest of all in the rain by claiming pole. I agree with the decision of the stewards to stop the race early despite that I wanted to race for it, they are responsible for our safety and I respect that,” said Néstor Girolami.

Thed Björk crossed the line in third position to take his seventh podium finish of the season and has claimed the championship lead by 0.5 points.

“This is no doubt one of the most eventful race weekends I have ever experienced. My goal was to claim the World Championship lead and I have done just that. We had some issues that we need to learn from moving forward, but the really positive thing that we bring with us to the next race in Japan is that we finally are on pace in the wet. I am happy with this weekend,” said Thed Björk.

Nicky Catsburg claimed the team’s third podium finish of the weekend at Ningbo International Speedpark by crossing the line in third position in the opening race.

“This has been a weekend of ups and downs for me. We didn’t get things right for qualifying and we need to work on that. I am happy with the podium finish, the team has scored vital points for both championships and I look forward to the next race in Japan,” said Nicky Catsburg.

The victory and three podiums in the FIA WTCC Race of China has elevated Polestar Cyan Racing to leading both championships, heading Honda by seven points in the manufacturers’ championship.

”We came to China trailing behind in both championships with the objective to lead both when we leave. Mission completed thanks to a super effort from everyone in the team under very tough conditions. We are heading to Japan with the objective to defend our lead,” said Alexander Murdzevski Schedvin, Head of Motorsport at Polestar.