A unique book showcasing 150 works of art depicting 25 historically important road and racing cars Claude Nahum was brought up surrounded by all things automotive. The son of Bernar... 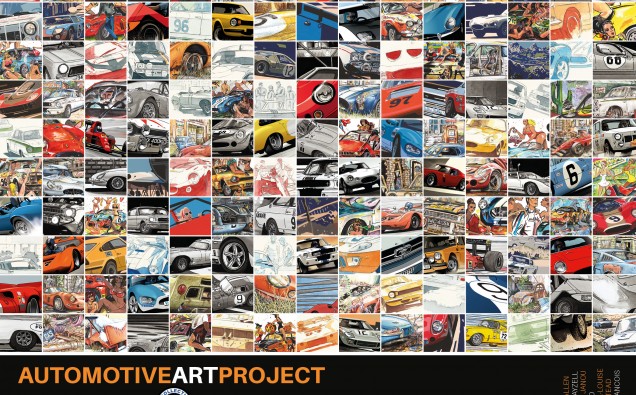 Claude Nahum was brought up surrounded by all things automotive. The son of Bernar Nahum, considered to be the father of the Turkish automotive industry, Claude was fascinated by cars and engineering from an early age. Claude’s career led him into automotive design, research and engineering, before eventually heading and growing the Kiraça group trading company in Europe, all the while maintaining his link with the automotive world.

As Claude’s career progressed, he began collecting and racing cars, and the growth of his stable led to him establishing The N Collection. Wishing to create a distinctive tribute to his favourite cars, Claude commissioned six leading artists, and gave them free rein to depict each of 25 cars from his collection in their own inimitable style.

The Automotive Art Project showcases that work, featuring a fascinating and diverse range of cars, including a 1964 Ferrari 250 LM, the unique 1964 Lang-Cooper II Super King Cobra, an iconic 1965 Ford Mustang 289 Fastback, the Ford GT40 MkII that finished third at Le Mans in 1966, a 1968 example of the very first Turkish production car, the Anadol A1, the 1971 East African Safari Rally-winning Ford Escort RS1600, and a 1990 Ferrari 641/2 Formula 1 car driven by Alain Prost.

A unique collection of automotive artwork, capturing each artist’s own perspective on the subject cars, supported by brief histories and photographs for each of the cars featured.

The authors
James Page is a respected classic-car journalist, and former editor of Classic & Sports Car. He has written several books for Porter Press, and is a regular contributor to a variety of classic-car and motoring-club magazines.

Steve Rendle is a lifelong motorsport enthusiast and has spent much of his career as a technical writer, editor and publishing project manager. He has written a number of books on motoring and motorsport subjects.

To request a review copy of this book, high-res images or a PDF of the manuscript, please contact:

About Porter Press
Porter Press International is publisher of some of the world’s finest motorsport and motoring books. Established in 2005 by leading automotive author Philip Porter, the company’s authors and co-authors include such highly regarded experts as Doug Nye, Ian Wagstaff, Chas Parker and Ray Hutton, and famous motorsport personalities Murray Walker, Martin Brundle and Stirling Moss.  Many Porter Press titles have been selected by leading magazines as Book of the Month and a number have been nominated for, and won, Book of the Year awards.

Introducing the Vantage F1® Edition: Race-track performance on the road