Students across the UK help to raise over £1.4million for Charity Week, despite the pandemic

Record-breaking amount of money raised in Charity Week’s history   Thousands of students across the UK and overseas have raised over a million pounds for children across the world... 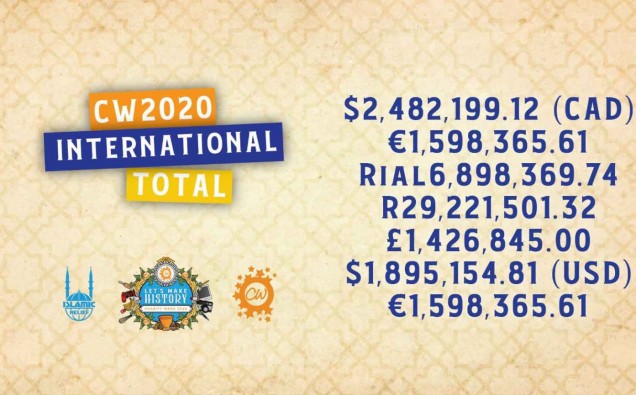 Thousands of students across the UK and overseas have raised over a million pounds for children across the world for international charity Islamic Relief.

In the UK alone, a phenomenal £878,000 was raised through a week of Covid-safe activities such as virtual auctions, where items such as toilet paper were auctioned off for £1k, a hand sanitiser for £600, a cake for £8k, and a can of fizzy drink for £2.3k.

A ‘2020 Challenge’ was also set during the week, in which fundraisers were asked to pick a challenge like walking, running or cycling, apply the number 20 to it and ask for sponsorship. This also included people avoiding sugar, becoming vegan, doing 20 push-ups or going carb-free for 20 days.

Charity Week takes place between 26 October and 1 November. It involves student Islamic Societies, schools, colleges and the general public up and down the country donating their time, energy and goodwill to raise money for Islamic Relief.

Charity Week began as an annual volunteer-led campaign launched by a group of students in London back in 2003. Over the years it has raised over ten million pounds. Funds raised go to emergency and long-term care for children in some of the world’s poorest places and fragile environments, like Gaza, Yemen, Syria and Afghanistan.

“It is truly amazing what has been achieved during Charity Week this year, especially during this difficult time.

“With the challenges of fundraising during the pandemic and not being able to raise money through dinners, treks and bucket collections, our inspiring volunteers from all over the world have still managed to excel and fundraise for some of the world’s most vulnerable people.

“Every year during Charity week, I always feel inspired seeing the energy and compassion that young people show for others. It gives me hope for the future. Charity Week is a practical example of what happens when people decide that they will put aside their differences and work together to build a better, more hopeful world.”