Interview with Rizwan and Muazzam

We were always inspired by our Uncle Nusrat Fateh 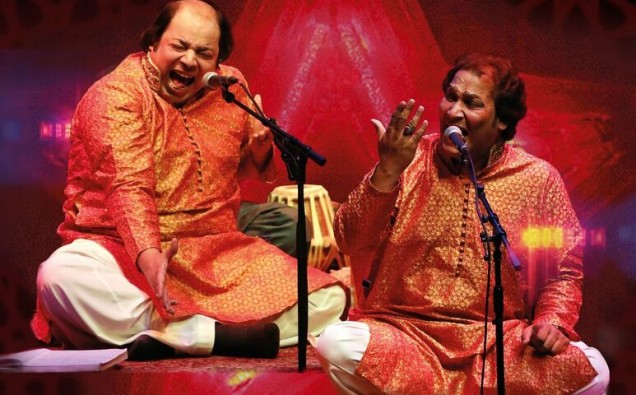 We were always inspired by our Uncle Nusrat Fateh Ali Khan as the entire singing of our family is different from that others and his technique has always been inspirational to us. He sang the most difficult compositions in such an easy way that even the person who does not understand the dynamics of singing will be able to enjoy hearing them.

Qawwali is basically a spiritual type of music but now it has become so popular among social events, as opposed to when it was limited to shrines. This is all thanks to our ancestors. Now, a lot of contemporary songs are also sung in the Qawwali style. Qawwali singing is more focused on lyrics as well as instrumental tones which, has developed more meanings for audiences and generate a greater variety of responses.

We have performed in front of as many as 20,000 people at Womad festival several times, and 30,000 people at Roskilde festival twice, and likewise many other festivals as well.

We expect a good turn- out in March 2019 as we had mostly sold out shows back in March 2017, where our Barbican performance was live streamed to over 1 million people.

We love all of his songs and it’s very difficult to choose one among all of the rest. However, we will be performing Nusrat’s qawwalis live, which have been much less sung and some audience members may not have listened to them before.

We are always interested to collaborate with any talented artist. We have collaborated with Temple of Sounds, Fundamental, Susheela Ramanand many more.

We will have some new songs on the tour and also I (Muazzam Ali Khan) have released a solo song myself called ‘Ishqa‘, and have some more on the way.