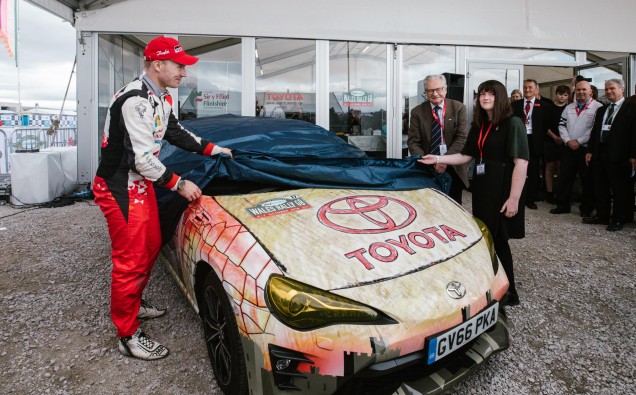 Fifteen-year-old Kirsty – a GCSE student at Dorin Park Specialist SEN College in Chester – was the creative force behind the winning effort, with her striking patriotic design selected from hundreds of entries in the UK-wide competition.

The car arrived at the Big Bang interactive exhibition at the Rally Village in Deeside after a short stop-off at Dorin Park, where it drew many an admiring glance from both staff and students.

“Wow – seeing it on paper and now seeing it in real life is overwhelming,” enthused Kirsty. “I was born in Chester and live in Ellesmere Port but most of my family are Welsh and this design has allowed me to express my Welsh side. I have included lots of scales for the Welsh dragon and a Welsh castle like the one that I see where we visit my nan in Wales. I also wanted to include an advertisement for Toyota on the bonnet to advertise it. Art and design is very much a part of me and this is just awesome.”

“We are immensely proud of Kirsty,” added Head Teacher Jane Hughes, “even more so as this isn’t just a special school category that she’s won – it was open to all students and judged without preconceptions, so nobody knew what school she was from.

“It’s a fantastic achievement and it’s an absolutely beautiful design – it looks great! It’s her last year at school and the confidence this will give her to go on and do something in art and design is immeasurable. After all, how many kids can say they have done something like this?”

Form Tutor Becky Joyce was similarly effusive about Kirsty’s winning effort, tipping the teenager for a bright future in the artistic sphere.

“We are incredibly proud of Kirsty,” she said. “She worked extremely hard on this back in the summer, spending several lessons creating the design and researching what elements she could include, thinking about how she could combine the brickwork of the castle with the scales of the dragon to make it relevant to Wales. When we sent it off she was very hopeful, but I don’t think for minute she thought she would win!

“She may go on to do a foundation arts course at a local college when she leaves us, as it’s definitely where her talent lies. Seeing it on the car, it looks so professional and yet it is still very much Kirsty’s original, individual design ­–­ you can see the strokes of her crayon on the car and it’s beautiful.”

The car – kindly provided by Toyota – will remain on show in the free-to-enter Rally Village throughout the weekend in front of the ‘Big Bang’ Industry Awareness STEM exhibition, which will provide inspiration for more than 1,500 visiting students pursuing key STEM (Science, Technology, Engineering and Maths) subjects at educational establishments throughout Wales and Cheshire.

Based alongside the WRC pits and paddock complex where all the competing rally teams are based, the Big Bang showcases a wide range of companies with specialisms in science, technology, engineering and maths inspiring students to get excited by those subjects.

“Congratulations to Kirsty,” praised Lord Elis-Thomas, the Welsh Government Minister for Culture, Tourism and Sport, who presented the winner of the Rally Car Livery Design competition with a scale model replica of the Toyota GT86 featuring her livery at today’s event. “The Big Bang is a fantastic interactive experience which will help to inspire the engineers and scientists of the future. Wales is home to around 150 component and systems manufacturing companies, which employ some 18,500 people within automotive manufacturing with an annual turnover of £3 billion. This is an excellent opportunity to get young people interested in the subjects they need to become a part of this dynamic sector in the future.”

The competition was a joint initiative between the rally organisers, Toyota and the Engineering Education Scheme Wales (EESW) on behalf of the Welsh Government, and was open to all primary schools, secondary schools and colleges in the region.

The partnership with Toyota is both apt and timely, as the Rally Village is located adjacent to Toyota’s Engine Manufacturing Plant in Deeside. The Japanese marque – which returned to the FIA World Rally Championship at the start of last year – currently leads the title race for the coveted WRC Manufacturers’ crown.

“Congratulations to Kirsty!” said Latvala, two times a winner of Britain’s round of the FIA World Rally Championship. “It’s an amazing design and I love the attention to detail, from the castle to the Welsh dragon.

“This is such a great initiative to inspire children to really indulge their abilities and follow their dreams – and the excitement on all the pupils’ faces as we took the wraps off the car showed just how much the activity has engaged them. I wish Kirsty all the best in her studies – I’m sure she has a bright future ahead of her.”