A book that for the first time looks at how the world’s largest democracy – India, prays took London by storm last week. On October 23, the who’s who... 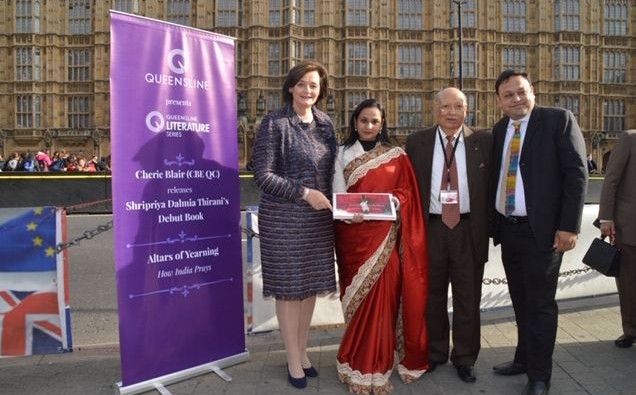 A book that for the first time looks at how the world’s largest democracy – India, prays took London by storm last week.

The book by first-time author Shripriya Dalmia Thirani was released by barrister Cherie Blair who is also the wife of former British prime minister Tony Blair.

She was joined by several other high profile guests – Lord Raj Loomba, Lord Narang Patel, Lord Chris Rennard, Lord Ben Stoneham, Lord Khalid Hamid and Baroness Prashar to celebrate the launch of the book which received rich praise from Mrs Blair and guests for being both an eye-opener to the world and also a lesson on how dozens of religions and its respective practices can coexist together in complete harmony.

Mrs Blair said “India is a country very close to my heart and the fact that it’s a secular nation is its great strength. The young female entrepreneur Shripriya is celebrating this secularity with her book Altars of Yearning – How India Prays which I launched in the UK on October 23”.

“India is an enormous country and to document anything from across the entire nation is a mammoth task in itself. But to document the private moments of its people in prayer, as Shripriya has done, is a truly extraordinary accomplishment.  It’s a book that talks of the power of faith and of prayer and I’m delighted to be launching it in the UK, as Britain is a multi-cultural and tolerant society that embraces all faiths and people from all over the world. So Shripriya couldn’t have chosen a more diverse country for this important event.  It’s a book full of spectacular imagery and brilliant story-telling from across India which I know will be enormously successful across the world,” Mrs Blair said.

Thirani who is the owner of Mumbai’s restaurants on the sea – Queensline Neverland and Queensline Sea YAH – both of which are opening to the public mid-November this year says that the book is a first of its kind repertoire that has documented the art of prayer – from Bengal to Maharshtra, Ladakh to Bhubaneshwar, Varanasi to Chennai, Bihar to Uttar Pradesh – asserting India’s true identity as a secular country.

Lord Raj Loomba who’s charity The Loomba Foundation has since 1997 been helping widows around the world will receive proceeds from the sale of the book.

At the launch, Lord Loomba said “I have had the great privilege of living both in India and the UK. The secular values of both these countries are their core strength. The people of India are free to pray to whichever God they follow without fear or prejudice. Britain too is similar – it is an all-embracing society where people are free to choose whether they want to pray in a church or a Mosque or a synagogue or a temple”.

“What excites me about Thirani’s first book is that it does not endorse any religion nor take sides – it endorses a deep spiritual relationship between man and God through the private institution of prayer. This book is a true masterpiece – from its concept to the visual storytelling – everything about this book is storytelling at its best, making this book a must-have for everyone across the world,” Lord Loomba added.

Thirani says that India’s real strength is in its people. According to her, festivals in itself mean nothing. “It mostly makes up with a few usual rules – mostly religious in nature and of course age-old traditions and customs thrown in. But what truly makes festivals worth its while is its uncanny ability to bring together people. There is another big aspect of festivals that always inspired me. It is the institution of faith. It isn’t religious – it isn’t ritualistic. In fact it is about believing and baring ourselves to a higher purpose. Our faith towards our family, to society, to humanity, to God and of course to food which I’m sure many of us know is the biggest religion in India. This I what my first book talks about”.

Over the past year, Thirani has paid tribute to the institution of prayer by commissioning a stunning body of work that she says glorifies India’s true power – its secularity.

She along with her team of photographers from across India followed the secret lives of Bramhacharis in Bodh Gaya to the households of Bengal bidding goodbye to Mother Goddess Durga. The series inside mosques will give you goosebumps while the photographs taken of prayer in daily life is indescribable beyond words.

The book will formally hit the stands from next month.  The Indian subcontinent is the birthplace of four of the world’s major religions – Hinduism, Buddhism, Jainism and Sikhism.

But what this book intends to reveal is faith and how man in flesh connects to God in spirit.

This book is not an assertion of a religion.

Like Thirani says “Prayer for me is the greatest art form. Like art, prayer expresses the inner yearning of the human soul: in prayer, our souls reach toward God as God reaches toward us”.

The photographs are majestic. The depth of knowledge of the idea is unprecedented, the images – most of which are candid are captured with tremendous sensitivity.

This book will leave you spellbound. Thirani is an entrepreneur and alumnus of the Indian Institute of Learning and Management which is affiliated to the University of Bradford from where she completed her Bachelors of Business Administration (BBA) before going on to do her MBA from Symbiosis Pune. She is also a trained graphic designer from Wigan and Leigh and has also run a very successful films distribution firm Nanu Productions. In April 2017, Thirani created history by winning the rights to start Mumbai’s largest restaurants on the Arabian Sea – Queensline.

The first thing she did after hearing the news was to pray.

Celebrating creative success with a cup of tea!

DOES CHEMICAL PEELING AFFECT THE SKIN