An award-winning Dorset celebrity chef has been presented with a prestigious Armed Forces Covenant in a moving ceremony during the Commandant’s Parade at the Royal Military Academy Sandhurst. Sarah... 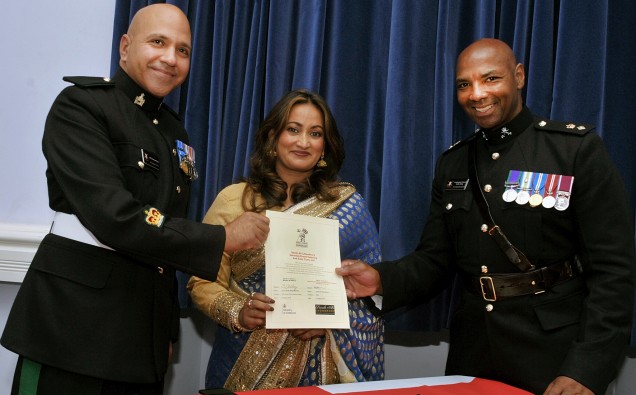 An award-winning Dorset celebrity chef has been presented with a prestigious Armed Forces Covenant in a moving ceremony during the Commandant’s Parade at the Royal Military Academy Sandhurst.

Sarah Ali Choudhury, a TV chef from Dorset and owner of a Gourmet Indian event catering company, was presented with an esteemed Armed Forces Covenant on the 8th August during the renowned Commandant’s Parade, the first time a pledge has taken place during this iconic event.

Sarah made a public commitment to support the Armed Forces and their families by providing flexible working environments to veterans and their partners, as well as employment opportunities within Gourmet Event Catering.

The Armed Forces Covenant is a promise from the nation, ensuring that those who serve or have served in the Armed Forces and their families are treated fairly.

Businesses from sole-traders to multinational public bodies and charities that wish to support the Armed Forces Community can sign the Covenant and publicly declare their commitments.

Sarah said: “I am so pleased to have had the honour and privilege of receiving The Armed Forces Covenant Award. It is the nation’s commitment to those who proudly protect our nation with honour, courage and commitment, a cause very close to my heart.’

“It is a pledge that together we acknowledge and understand that those who serve or who have served in the armed forces, and their families, should be treated with fairness and respect in our communities, economy and society which they serve with their lives.’

“I would like to thank each and every member of The British Armed Forces for serving and protecting us. For any business people, heads of organisations and people of influence who may be considering applying for a Covenant, I echo the words ‘ask not what your country can do for you, but what you can do for your country.’

Sarah has received over seven awards and accolades in the past year including being listed in The British Bangladeshi 100 Power and Inspiration List and becoming a finalist in Tommy Miah’s International Indian Chef of the Year where she received her award from HRH The Princess Royal.

Recently Sarah picked up The Influential Woman of the Year 2018 in the National Venus Awards.

Wessex Reserve Forces’ and Cadets’ Association Regional Employer Engagement Director, Jon Beake said: “It’s fantastic that Sarah Ali Choudhury has joined businesses across the South West that have pledged their support by adopting their own Armed Forces Covenants; it’s been a pleasure tailoring the pledges for her to make it relevant and mutually beneficial.”

To find out more about how your organisation could benefit from pledging their support to the Armed Forces community contact the Regional Employer Engagement Directors, Jon Beake or Rachael Brannagan, on 01823 250110, wx-reed@rfca.mod.uk  or 01823 250118, wx-reed2@rfca.mod.uk.