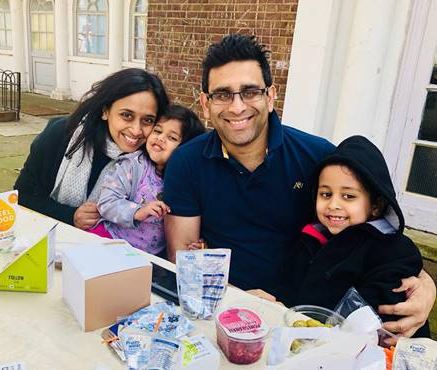 Five-year-old Kaiya thrives winning races at sports day and enjoys swimming and gymnastics. She also loves the colours blue and pink, watching Topsy and Tim and playing ‘mummies and daddies’ with her three-year-old sister Annika.

But after being diagnosed with acute lymphoblastic leukaemia (ALL), Kaiya has had to put many of her favourite things on hold because she needs a lifesaving stem cell transplant within the next few months.

Blood cancer charity Anthony Nolan is now searching the worldwide registers for a donor whose tissue type matches Kaiya’s, and who is willing to donate their stem cells to save her life. However, the search is made more difficult due to Kaiya’s Indian heritage, which means she is three times less likely to find a perfect match.

Currently, donors from Asian or other minority ethnic backgrounds, make up just 16% of the register, and patients have only a 20.5% chance of finding the best possible donor match, compared to 69% for people with white, European heritage.

Kaiya was diagnosed with ALL in March this year. The budding artist loves colouring at school and her dad, Ruchit currently has ‘at least 20 works of art’ on his desk at work.

Ruchit recalls: “Family life was bliss. We’re a really loving family with two girls who adore each other. The girls were looking forward to, one day being at school together and we were getting ready for our holiday.

“Kaiya had some bruising which we wanted to get checked out before flying. We honestly thought it was nothing serious and took Kaiya to hospital so we could fly without worry. To be told that Kaiya had leukaemia was like a punch in the stomach.

Kaiya was taken from Watford General to Great Ormond Street Hospital, where she spent four weeks receiving treatment, including chemotherapy. Kaiya has returned home as the urgent search continues for her match.

Ruchit says: “Kaiya holds her beads of courage: each bead represents a procedure or something she has had to endure. She is already half way through her second string and we hope she can look back at this and be proud of how much she has had to go through. The drugs and treatment has taken a significant impact, and she is very tired – but she is coping with it all and continues to look after her little sister. We’re so proud of her!”

Rebecca Pritchard, Head of Register Development at Anthony Nolan says: “Kaiya is an inspirational little girl who, despite everything she is going through is still there being a great big sister to Annika. Somewhere out there, there is a potential lifesaver who could help give her a second chance of life. A second chance to be at the same school as her little sister.

“If you’re aged 16-30 you can join the register online and we’ll send you a cheek swab in the post. If you’re found to be a match for a patient you could donate your stem cells and give hope to families like Kaiya’s.”

Anthony Nolan has launched a new campaign, Be A Lifesaver, to raise awareness of stem cell donation and to encourage anyone aged 16-30, and in good general health, to join the Anthony Nolan register.