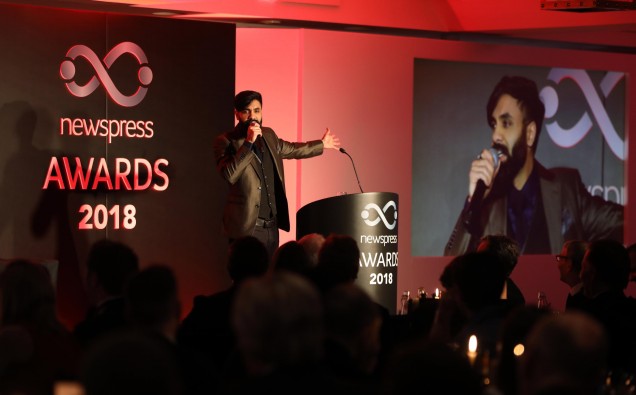 Twenty-five winners from automotive journalism and PR were announced at the third Newspress Awards at The Brewery in Chiswell Street, London, last night.

The star-studded dinner featured comedian Paul Chowdhry and returning for his third Newspress Awards, ‘voice of the balls’, Alan Dedicoat, who oversaw proceedings.

The evening was completed with the Lifetime Achievement Award, which went to Audi’s Head of PR, Jon Zammett.

Another highlight of the evening was the prestigious Special Newspress Award, which was presented to Sue Baker.

Eight expert judges, each renowned and highly respected in their fields, had their work cut out in 2018 with the exceptional standard of entries across the categories. However, a combination of industry experience and expertise culminated in the shortlist of deserved winners in the Awards, presented during last night’s ceremony.

Other honours on the night included Automotive Editor of the Year, which was awarded to Company Car Today Editor Paul Barker, and the Automotive Consumer Publication Award presented to Modern Classics.

In the PR awards, which are determined by votes from the Newspress subscribers, Kia followed last year’s success and retained the Automotive Press Office of the Year Award.

Part of the evening was dedicated to recognising up and coming talent in the industry. In the Rising Star (Journalist) category, Matt de Prez came highly commended with Honest John’s Georgia Petrie taking the main accolade. Jessica Grimditch from Suzuki took the Rising PR Star Award for 2018 in what turned out to be a hotly-contested category this year.

Alun Parry, Head of Press and PR at Suzuki collected the Automotive PR of the Year for 2018.

Lewis Kingston was awarded the Road Tester of the Year and Martin Saarinen was given the Automotive Consumer Journalist award.

Honest John was amongst the awards again in 2018, collecting the Automotive Website award for the third time.

Performance Comms were recognised with the Automotive Campaign award, with Inside Media (a winner last year) this year winning the Automotive PR Support Agency award.

Representing Ireland, Maurice Malone was the Irish Journalist of the Year and Paddy Comyn took the Irish PR of the Year.

Newspress’ Managing Director, Tim Barfoot, said: “Once again, the awards ceremony was a fantastic success and congratulation to all the winners. This year we received a record number of entries, and it’s not just about quantity – the standard was extremely high.”