An Indian man has broken the Guinness World Record for most titles in Engineering held by a single individual   Eur Ing Bishnujee Singh of Seattle, Washington, USA has been... 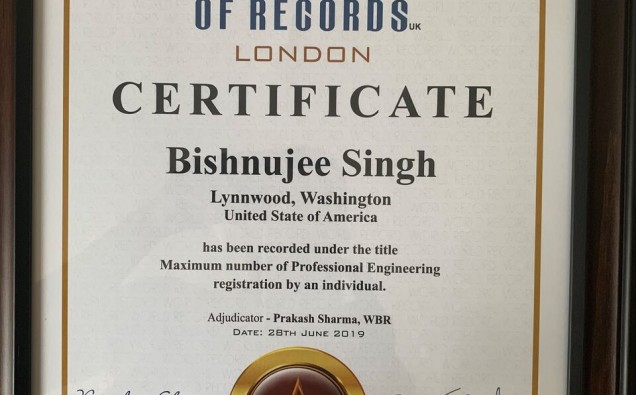 Mr Singh has been CEO of Cayley Aerospace Inc for the past ten years. Having started his career as an Aeronautical Engineer, he has risen to the rank of a Chartered Engineer Fellow of the Royal Aeronautical Society London and Chartered Professional Engineer Fellow of Engineers Australia for his valuable contribution to the Aerospace Industry over the past decade. He is also a Chartered Member of Engineering New Zealand and Fellow of Society of Operation Engineers. He has received Highly commended SOE Plant Engineer of the Year 2012.

Mr Singh currently holds more than 30 Professional Engineer Registrations in the world from across the continent from various Professional Bodies and Government regulators.