Indian masterpiece snapped up by the British Museum 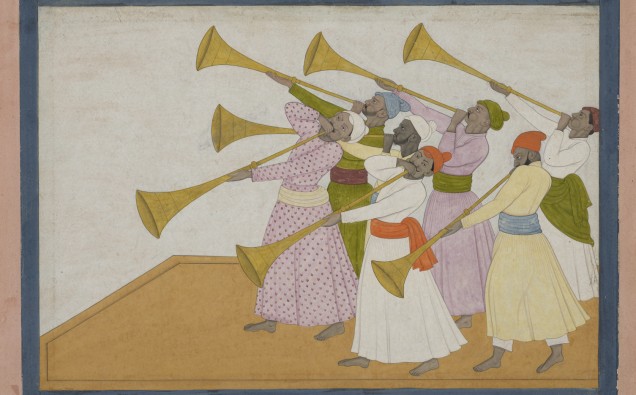 A painting that was made by Nainsukh of Guler who is said to be one of the greatest painters in India has been stopped from leaving the country after he was snapped up by the British Museum.

The painting called The Trumpeters, by Nainsukh of Guler, depicts a traditional musical performance in northern India.

It was designed around 1735 to 1740, showing musicians playing Pahari horns, with long pipes known as Turhi, with their cheeks puffed out the effort.

The export licence was blocked in 2018 by the Culture Secretary, to ensure that a UK institution would be able to raise the £440,000 needed to keep the painting in the UK.

British Museum curator Imma Ramos said: “Nainsukh, whose name translates as ‘Delight of the Eyes’, is one of India’s greatest courtly artists, and this outstanding painting showcases his gift for complex composition and precise observation.”

“It was painted at the height of his career while he was working for the ruler of Jasrota, Raja Balwant Singh. Its jewel-like colour, intricate detail and poetic mood suggest it would have been seen up close and studied at leisure, enjoyed privately or among guests.”

“We are delighted that it is now in a public collection for the first time, where it can be enjoyed by visitors for its beauty, and help the further study of South Asian art.”

The painting has been described as a work “unparalleled in north Indian art”, and it has been freely displayed in the museum’s Sir Joseph Hotung Gallery of China and South Asia.

The beautiful piece has also been bought with support from the National Heritage Memorial Fund, the Brooke Sewell Permanent Fund and the Art Fund.

Arts Minister Helen Whately said: “This beautiful work has enormous historical value and will be admired by visitors from around the world as it goes on display at the British Museum.”

“Export bars are put in place to save masterpieces like this one for the nation, and I’d like to say a massive thank you to everyone whose generous support made this acquisition possible.”

Veganuary at the Mailbox with Indico