The Judicial Commission report on the 2014 Army Public School 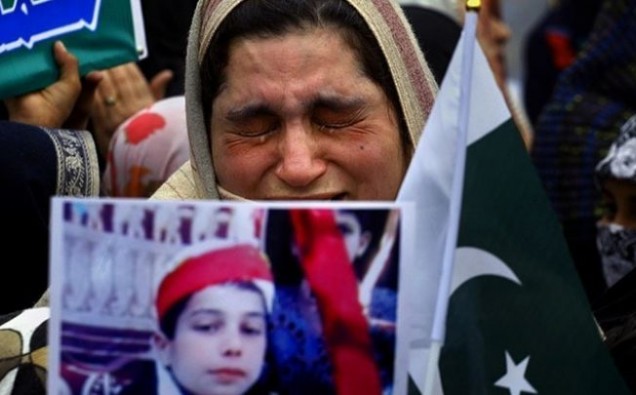 The Judicial Commission report on the 2014 Army Public School (APC) massacre released on Friday observed that although the armed forces remained successful against terrorists in Operation Zarb-e-Azb, the tragedy plagued their success stories which deserved deification.

The 525-page report – authored by Justice Mohammad Ibrahim Khan of Peshawar High Court – was released on the direction of the Supreme Court.

The report consists of four parts, including the response of the Ministry of Defence as well as relevant portions of the statements of complainants/aggrieved parents.

The report noted that the generic threat issued by the NACTA was for “all the academic institutions run by the armed forces” and had identified that its sole objective was to “target the army families as retribution for the unstoppable and successful military operations against the terrorists’ hideouts, particularly, Operation Zarb-e-Azb and Khyber-1.”

Accordingly, the inquiry report noted that this laid a heavy duty on the shoulders of 11 Corps to operate against the terrorists’ niches and also to defend its positions – both soft and hard.

“Howbeit, the armed forces remained successful in achieving the former goal but the incident of APS plagued their success stories which deserved deification,” the commission noted.

The report further noted that the “fiasco” was also attributable to “the incomparable number of static guards composing the first tier of security apparatus to the level of looming threat”, besides their “improper position and accentuating main-gates and front area compromised security from back-end wherefrom terrorists managed entry with no retaliation.

It further observed that despite the “three-layered security protocol”, namely the two security patrol vehicles, quick response force of the armed forces located 10 minutes away and police rapid response force, the catastrophe could not be prevented. One patrol vehicle was “beguiled towards the smoke erupted from the vehicle set ablaze by terrorists as part of their plan”, leaving the school premises unattended.

“This act alone gave an edge to the militants to break into the premises from the back side where the [vehicle] had to patrol,” says the report. It noted that though the other patrol vehicle responded, it alone was not capable of buying the needed time for the rapid response forces to overwhelm the terrorist attack.

“Equally incomprehensible is the inertia on part of the Askari Guards as well as the deputed Static Guards to the initial heavy firing and blasts by terrorists until the [rapid response forces] had arrived,” says the report.

“Had they shown a little response and could engage the militants in the very beginning of the attack, the impact of the incident might have been lesser,” the report added. It, however, praised the efforts of “valiant soldiers” of one of the patrol vehicles and the armed forces rapid response, which restricted the movement of militants towards the adjacent toddlers’ block, “and thus further devastation in that block was foiled”.

The inquiry report added that the Unit regulating the MVT-1 had been awarded punishment pursuant to the court of inquiry. The report noted that terrorism in the country hit a high point in 2013-14. In this backdrop, terrorists from across the border (Afghanistan), infiltrated the school and “befooled” the security apparatus.

It observed that the country’s “porous” north-west border saw the flow in and out of Afghan refugees as per the arrangement between both sides allowing unrestrained movement. In this regard, it noted that assistance to the attackers was provided “from inhabitants of the locality” and termed it “palpable” and “unpardonable”.

“I can perceive it with utmost honesty that when one’s own blood and flesh commit treachery and betrayal, the result would always be devastating,” the judge wrote. He said this act of betrayal “diminished and compromised” the efforts of our security apparatus and “augmented” the accomplishment of the “enemy’s nefarious plan”.

“No agency, how capable and able in terms of manpower, infrastructure and technology can outperform the impact of any attack effortlessly when infidels are within the inside,” the report noted.

Meanwhile the federal government in pursuant of the Supreme Court’s direction also gave its comments on the inquiry report and contended that the federal and provincial governments had undertaken numerous steps for providing medical as well as psychological treatment for the injured, their education and welfare and measures for alleviating the pain and agony of the bereaved families including financial support.

It submitted that two seats in each university of engineering and technology, Peshawar and Khyber Medical University Peshawar had been reserved for the victims’ families.

The federal government further submitted that it was the obligation of the state to continue to provide for the welfare of those injured in the incident and where possible extend worldly comforts for the members of the bereaved families, which could possibly help them live a less painful life.

Meanwhile, the Supreme Court Friday directed the government to make public the judicial commission’s report on the Army Public School (APS) Peshawar tragedy and ensure an investigation starting from the top rather than holding the low-ranking officials responsible for the security lapse.

A total of 141 precious human lives, including 131 schoolchildren and 10 others, were martyred when heavily armed militants stormed the APS on December 16, 2014.

The observation from the top court came during the hearing of APS suo motu case by a three-member bench headed by Chief Justice of Pakistan Justice Gulzar Ahmed.

The apex court passed orders for making the report public after Attorney General for Pakistan (AGP) Khalid Javed submitted the federal government’s response to the report.

The AGP informed the court that some of the judicial commission’s recommendations had been implemented in letter and spirit and assured that every possible action would be taken against those responsible for the incident.

In the August 4 hearing, the apex court had directed the AGP to seek instructions from the federal government about the steps to be taken on the 525-page report recently submitted by the judicial commission led by Justice Muhammad Ibrahim Khan of Peshawar High Court (PHC).

The commission recorded statements of 101 witnesses and 31 police and other officials of law-enforcement agencies. Former chief justice of Pakistan Mian Saqib Nisar had constituted the commission in 2018 on the request of parents of the martyred children.

The parents were also present in the courtroom on Friday. Former president Supreme Court Bar Association (SCBA) Amanullah Kanrani offered his assistance to the court as amicus curies, which the court accepted.

“Do you want those responsible for security negligence to be punished,” Justice Faisal Arab asked, to which the parents of the martyred children said, “We have been buried alive!” “Everyone was gathered into one hall and killed there,” the bereaved parents added. “It was a targeted killing!”

Justice Faisal Arab said strict action would be taken against those failing to ensure security intelligence. Justice Ijazul Ahsen observed that the whole nation was grieved.

The chief justice instructed the attorney general to ensure that the investigation started from the top instead of interrogating the low-ranking officials and holding them responsible. “This trend must come to an end now and the government should focus on taking action so that such gruesome incident would not happen in future,” Justice Gulzar remarked.

He said the prosecution must dig out names responsible for their sheer negligence, resulting into the tragedy. The chief justice said the names of responsible persons failing to provide timely intelligence on the incident should also come on the surface.

“Those who wanted to achieve the goal achieved it,” the CJP added. “The security agencies should have been aware of this conspiracy. People are not safe even in such high-security zones. How did such a big security lapse occur? What’s the point of such high security when people still are not safe,” he inquired.

Meanwhile, the parents of martyred children wanted that such barbaric incidents should not happen in future. The grieving parents said they knew their children could not come back but the state must ensure maximum protection at all educational institutions countrywide. Meanwhile, the court directed that the copies of the report should also be given to the parents and adjourned the hearing for a month.