The psychological thriller Evil Eye is now available to watch on Amazon Prime Video now. The film is based on the Audible Original by Madhuri Shekar and is directed by award winning directors Rajeev and Elan Dassani. The film... 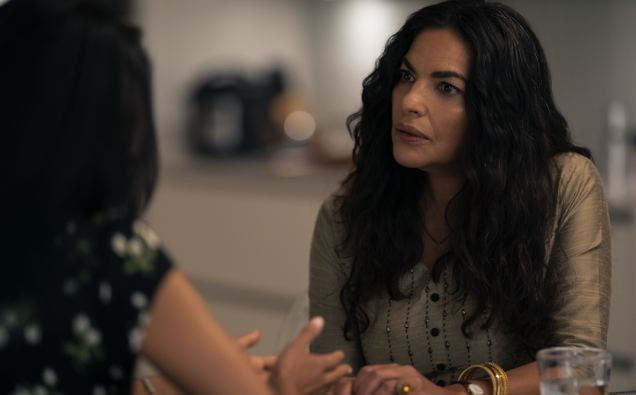 The psychological thriller Evil Eye is now available to watch on Amazon Prime Video now. The film is based on the Audible Original by Madhuri Shekar and is directed by award winning directors Rajeev and Elan Dassani. The film is produced under actress Priyanka Chopra Jonas’ home banner Purple Pebble Pictures and Jason Blum’s Blumhouse Productions. Leading actress Sarita Chaudhry recently spoke out about what it was like working on the film co-produced by Priyanka.

Sarita Chaudhry said: “What impresses me is that Priyanka, where she’s at with her career, could continue solo just thinking about her career. But the fact that she wanted to produce something and get other actors to be in it and to be represented. She said somewhere she really wanted to have an Indian lead on a poster, and she has two, two women on a poster. And I thought when she said that I was like ‘she’s using her power’ and that’s amazing”.

Speaking further on seeing herself on the poster for Evil Eye for the first time, Sarita said “When I saw the poster, I was like first ‘I’m on the poster’, huge moment! Second, two of us are on the poster, and it’s a cool poster. It’s not over explaining anything, it’s not trying to show where we are or let you know it’s India. It’s just 2 faces blended, and I was shocked and happy”.

Sarita also took time to talk about reactions to the film, she said: “The more we’re getting reactions to the film, this is big because it’s also timely with what’s happening in the business. There’s a bit of a revolution, but with most revolutions the result is very slow, and we feel like this is an example where it’s all South Asian. The story is universal even though on one level it is very Indian. I have so many friends who don’t know anything about India, but they say ‘oh, I relate to this mother’”.