IT IS CRICKET, NOT CASES AT THE CRIME BRANCH OF BREATHE: INTO THE SHADOWS 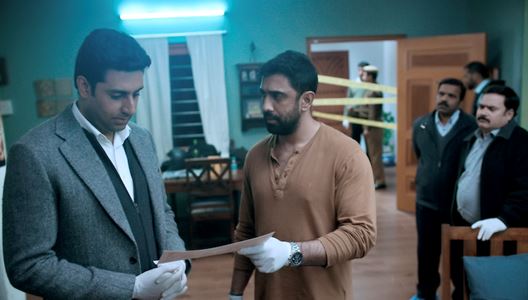 Amazon Prime Video launched an all-new Amazon Original Series Breathe: Into The Shadows on 10th July 2020. Created and produced by Abundantia Entertainment, the all-new psychological crime thriller sees Bollywood superstar Abhishek Bachchan make his digital on-screen debut with Nithya Menen. As fans have been going gaga over the bond that these characters share on the screen, Amit Sadh, who reprises his role as Senior Inspector Kabir Sawant, took to social media to share some behind the scenes moments that well reflects on the camaraderie of the actors on screen.

In a short video, we see Amit Sadh and Hrishikesh Joshi, who play the roles of Kabir Sawant and Prakash Kamble,indulge the entire cast and crew of the show in a series of cricket matches. With the set erected at a school campus, the entire cast and crew, including Abhishek Bachchan, Amit Sadh and even director Mayank Sharma, along with the spot boys, make-up artists and the light men would indulge in a game of cricket in between shots. It seems like the gentleman’s game has got everyone excited more than the mysterious case they have at hand. And considering the amount of time spent on the field instead of solving crime, it’s safe to say where the fun lies for the cast and crew members of Breathe: Into The Shadows.

Watch the Prison Fight Scene from Breathe – Into the Shadows here: