Amazon Studios upcoming film Evil Eye is a gripping thriller with a suspenseful and chilling storyline. Produced by Priyanka Chopra Jonas and Jason Blum (Get Out), Evil Eye is set to take audiences on twists and turns to explore... 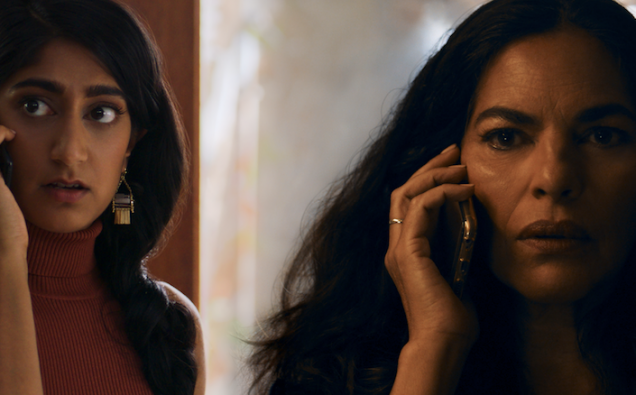 Amazon Studios upcoming film Evil Eye is a gripping thriller with a suspenseful and chilling storyline. Produced by Priyanka Chopra Jonas and Jason Blum (Get Out), Evil Eye is set to take audiences on twists and turns to explore a dark past and tense family secret.

Ahead of the upcoming release of the psychological thriller, the leading cast shared their thoughts on why they were attracted to the script.

Sarita Choudhury, who plays the mother said this about the script: “You begin it and you think you’re in one movie … like a bright, cheery mother wants to get her daughter married. Then you move into what seems a little about psychology. Then when it turns … I remember thinking ‘I don’t know how to make this work’ where the audience will believe all this, and that’s what interested me”.

Sunita Mani, who plays Pallavi, said about her role: “The mother daughter relationship really stuck out to me and the fact that it’s long distance phone calls. And it kinds of feels like a play in a way, because you’re sort of staging conversation and it brings this sense of longing to the relationship and really expresses this cultural divide that I find familiar. It really spoke to me in a way that was so close to a version of myself that I had never encountered before in a script.”

Omar Maskati, who plays Sandeep in the film said about his character: “I was so unsure of whether or not it was going to…it felt like it would hinge a lot on how you felt about Sandeep. What you knew about him and what you understood, and so I just thought ‘that’s so interesting and that’s so cool’. To see a character and to not really know, is Usha (Sarita) losing it or is it Sandeep? Is there something wrong with him? It just seemed like a really fun guessing game for the audience to get to play.”

How to enjoy Halloween during lockdown

AROUND THE WORLD IN 40 WINKS