Pakistani superstars, Mahira Khan and Bilal Ashraf, have been announced as international ambassadors for Barnardo’s – the UK’s leading and largest children’s charity. The announcement was made on Wednesday... 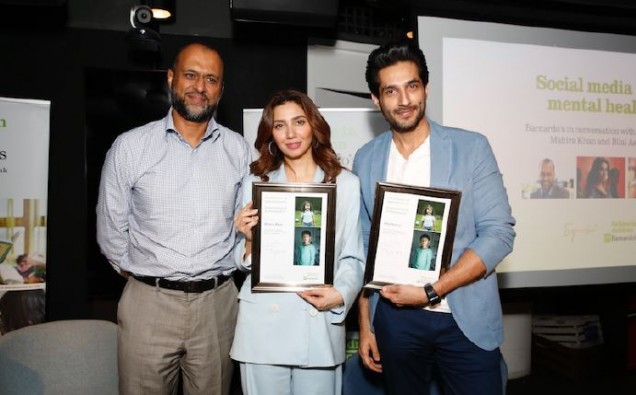 Pakistani superstars, Mahira Khan and Bilal Ashraf, have been announced as international ambassadors for Barnardo’s – the UK’s leading and largest children’s charity. The announcement was made on Wednesday 7th August at an exclusive event at Twitter HQ, where the actors took part in a panel
discussion with Barnardo’s Chief Executive, Javed Khan.

The discussion, chaired by UK TV presenter and long-time Barnardo’s ambassador Sonali Shah, looked at the impact of social media on young people’s mental health as highlighted in Barnardo’s recent report ‘Left to their Own Devices’. Mahira and Bilal will help the charity to raise awareness of issues affecting
vulnerable children, young people and their families in the UK, including mental health and wellbeing, child sexual exploitation and children in and leaving care. They will also be championing the work Barnardo’s does via its 1000+ services across the UK.

The actors were in the UK promoting their new film, Superstar. Mahira Khan said, “I am delighted to be joining the Barnardo’s family. As a mother myself, I think it’s really important that adults listen to young people and think about how our decisions affect their future. “Through my career, I have experienced the highs and lows of social media. I know what a powerful and amazing tool it can be, but I also know how important it is that we do all we can to keep our children safe online.” Bilal Ashraf said, “It’s a great honour to join Barnardo’s as one of their ambassadors. Every day this amazing charity works tirelessly to support and protect vulnerable children and young people across the UK.

“I think it’s really important that people in the spotlight, like myself and Mahira, consider what impact our social media posts have on young people and make sure we’re putting out content that is genuine and inspiring.” Barnardo’s Chief Executive Javed Khan said, “I am hugely grateful to our new ambassadors for showing their support for Barnardo’s and joining our growing global family of ambassadors. We are incredibly fortunate to have such big stars championing our work.

The event was also supported by British professional boxer and long-time ambassador of Barnardo’s Amir Khan. He said, “I think it’s great that Barnardo’s raises awareness of children’s mental health and how to use social media safely.

I have supported Barnardo’s for several years, and I’m extremely proud to be one of their ambassadors. It’s fantastic that their global family is growing and we can all use our voices to raise awareness of the issues that vulnerable children and young people in the UK face.”