Watch the song here>>> The first song from action drama film Baaghi 3 titled ‘Dus Bahane 2.0 is out now. The song has been sung by Vishal & Shekhar and is set to... 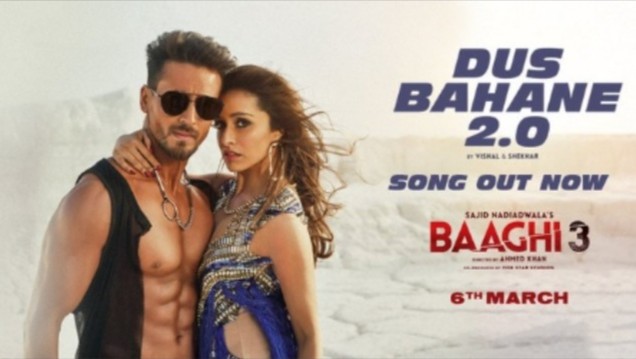 The first song from action drama film Baaghi 3 titled ‘Dus Bahane 2.0 is out now. The song has been sung by Vishal & Shekhar and is set to become the most badass song of the year that will get everyone grooving.

The music video of Dus Bahane 2.0 features Tiger Shroff and Shraddha Kapoor and sees the actors match steps at exotic locations dressed in glamourous outfits. The chartbusting track has been shot across three picturesque locations of Mumbai, Rajasthan and Serbia.

Fox Star Hindi tweeted the release of the song across their social media posts saying ‘Where’s your party at? The Baaghis are all set to rock your block with the most badass song of the year #DusBahane 2.0 is out now. bit.ly/DusBahaneKarke #Baaghi3 #SajidNadiadwala @iTIGERSHROFF @ShraddhaKapoor @Riteishd @khan_ahmedasas @WardaNadiadwala

Baaghi 3 tells the story of Ronnie and Vikram who are brothers sharing an unbreakable bond. Since childhood, Ronnie always comes to the rescue whenever Vikram falls in any trouble. Their journey begins when a certain turn in events, leads Vikram to travel abroad to complete some work. On this trip, Vikram gets kidnapped by people who are not to be messed with but as Ronnie witnesses his brother getting beaten and kidnapped, he knows that he will do whatever it takes to destroy anyone and anything that stands in the way of Vikram’s safety. Ronnie goes on a rampage of destruction to see his brother safe again, even if it means that he independently has to take on an entire country.

Baaghi 3 is slated to release worldwide on the 6th of March.

Against his strongest enemy, His greatest battle, Up against a nation, RONNIE is back!  #Baaghi3 trailer out now – https://youtu.be/jQzDujMzfoU