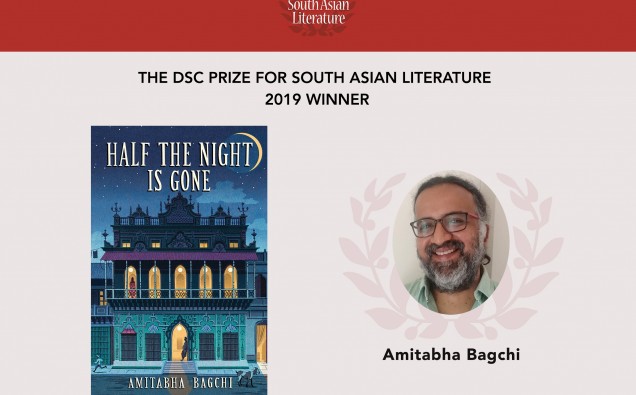 Amitabha Bagchi’s  brilliant novel “Half The Night Is Gone” has won the prestigious DSC Prize for South Asian Literature 2019. The announcement was made at a special Award Ceremony at the IME Nepal Literature Festival today in the picturesque city of Pokhara. Honorable Mr Pradeep Gyawali, Minister for Foreign Affairs of Nepal, along with Surina Narula, co-founder of the DSC Prize presented the winner’s trophy to Amitabha Bagchi in an event attended by key dignitaries, literary enthusiasts, writers and media. The DSC Prize has always encouraged diverse voices that bring alive the layered nuances of South Asian life, and Bagchi’s novel, a post-colonial saga that unfolds over three generations, adroitly explores human relationships, and the intertwining of fates and cultures in a thoroughly Indian context. The novel’s amazing attention to details, the inventive use of language, and its memorable well defined characters make it an outstanding read.

The five member international jury panel for the DSC Prize 2019 and the shortlisted authors were present at the event where the authors did a reading from their shortlisted novels. The winner announcement was well received by the audience present at the IME Nepal Literature where the best of Nepali and South Asian literature were on view. This is in line with the prize’s vision to encourage literary talent in various South Asian countries which it has been doing by announcing the winner in Sri Lanka, Bangladesh, India and Nepal over the last four years.

Jury Chair Harish Trivedi, speaking on behalf of the jury said, “South Asia is now perhaps more visible and more omnipresent than ever before. There is a South Asia at home and a South Asia abroad and both inhabit a shared literary space of writings originally in English or translated into English. The DSC Prize for South Asian Literature is the only prize which encompasses nine different countries in South Asia and the diaspora, and this year we also received entries from some writers with no ethnic connection with South Asia. For the five jury members located in five different countries, reading 90 novels in 90 days was a transformative experience. Over the months, we arrived at a diverse and inclusive longlist of 15 and a shortlist of 6 novels, representing the polyphonic richness of the region. It is out of this collective literary churning that there has emerged a winner whose work subsumes many languages and sensibilities.”

Ajit Baral, Director of the IME Nepal Literature Festival, made the opening address and welcomed the DSC Prize to Nepal and the city of Pokhara. As part of the evening program, the 5 member international jury panel of the DSC Prize was introduced, the shortlisted authors read excerpts from their books, and culminated with the trophy being presented to Amitabha Bagchi, the winner of the DSC Prize 2019.

Congratulating the winner, Surina Narula, co-founder of the DSC Prize said, “My heartiest  congratulations to Amitabha Bagchi for winning the DSC Prize for South Asian Literature 2019 for his brilliant novel ‘Half The Night Is Gone’. All the shortlisted books this year deal with diverse and powerful themes and there were three debut novels and a book about Afghanistan. It is a tough decision as always for the jury to choose a winner from these exceptional entries.  We are delighted to be invited to give the award this year in Nepal and I hope this encourages more publishers from Nepal to enter their books for the prize next year. The DSC Prize has now completed nine years and it is heartening to see the increased interest amongst readers across the world in South Asian life and culture through these books.”

The DSC Prize for South Asian Literature 2019 was judged by a diverse and distinguished five member jury panel comprising eminent figures drawn from the international literary fraternity who have worked in or around South Asian literature and issues. This year’s international  jury panel included  Harish Trivedi, (Jury Chair) former Professor of English at the University of Delhi who has written extensively on colonial and post colonial literature, Jeremy Tambling, former Professor of Literature at the University of Manchester with an interest in present and past literatures, in critical theory, and in film, Kunda Dixit, Editor of the Nepali Times newspaper in Kathmandu, and author of several books on the South Asian region, climate change and technology,  Carmen Wickramagamage,  Professor of English at the University of Peradeniya, Sri Lanka, whose work has focused on feminism, postcolonial theory, and ‘Third World’ women writers, and  Rifat Munim,  a bilingual writer, essayist, and translator, and the literary editor of Dhaka Tribune in Bangladesh, with special interest in South Asian English writing.

JURY CITATION FOR ‘HALF THE NIGHT IS GONE’ BY AMITABHA BAGCHI

The DSC Prize for South Asian Literature 2019 goes to Amitabha Bagchi for his novel ‘Half the Night is Gone.’ This novel, written in English, feels like a book written in an Indian language, and has the authenticity and the interiority of a work in translation without in fact being a translation. All sub-continental novelists in English since Raja Rao have striven “to express in a language that is not one’s own a sensibility that is one’s own”, and this novel evokes the sensibility of not one but three Indian languages: Hindi, Urdu and Sanskrit. It weaves together three parallel stories, interrogating the relationships between men and women, fathers and sons, masters and servants, and the nation and the individual. It is epic in scope, profound in its exploration of class and gender, and elegantly assured in the way it infuses English with Indian wit and wisdom to achieve an unprecedented commingling of different literatures and cultures.

About the DSC Prize for South Asian Literature:

The US $25,000 DSC Prize for South Asian Literature which was instituted by Surina Narula and Manhad Narula in 2010, is one of the most prestigious international literary awards specifically focused on South Asian writing. It is a unique and coveted prize and is open to authors of any ethnicity or nationality as long as the writing is about South Asia and its people. It also encourages writing in regional languages and translations, and the prize money is equally shared between the author and the translator when a translated entry wins.

Now in its 9th year, the DSC Prize has been successful in bringing South Asian writing to a larger global audience by rewarding and showcasing the achievements of the authors writing about this region. Past winners of the prize have been H M Naqvi of Pakistan, Shehan Karunatilaka of Sri Lanka, Jeet Thayil and Cyrus Mistry from India, American author of Indian origin Jhumpa Lahiri, Anuradha Roy from India, Anuk Arudpragasam of Sri Lanka, and Jayant Kaikini along with translator Tejaswini Niranjana of India who won the prize last year.

About the IME Nepal Literature Festival

The only international literature festival in the country, the Nepal Literature Festival was conceived as a forum for fostering pluralities of thoughts and ideas, tolerance, inclusiveness, and literature. True to its founding ethos, it has over the years given space to diverse—often competing—ideas and unheard voices. It has been sensitive to the inclusion of women and marginalized groups, including Dalits, LGBTQI+ and Madhesis. Started in 2011, the Festival aspires to be a neutral venue where writers, artists, filmmakers, singers, and intellectuals from South Asia can come together to discuss varied issues pertinent to the times.

The celebrated Hindi novelist Vishwanath is heartbroken by the recent loss of his son in an accident. The tragedy spurs him to write a novel set in the household of Lala Motichand. It follows the lives of the wealthy lala and his three sons: self-confident Dinanath, the true heir to Motichand’s mercantile temperament; lonely Diwanchand, uninterested in business and steeped in poetry; and illegitimate Makhan Lal, a Marx-loving schoolteacher kept to the periphery of his father’s life. In

an illuminating act of self-reflection, Vishwanath, the son of a cook for a rich sethji, also tells the story of the lala’s personal servant, Mange Ram, and his son, Parsadi.
Fatherhood, brotherhood and childhood, love, loyalty and poetry – all come to the fore as sons and servants await the lala’s death. By writing about mortality and family, Vishwanath confronts the wreckage of his own life while seeking to make sense of the new India that came into being after independence. Spellbinding and penetrating, Half the Night Is Gone raises questions of religion, literature and society that speak to our fractured times.

Amitabha Bagchi is the author of three novels. The first, Above Average, was a bestseller. His second novel, The Householder, was published to critical acclaim and

the third, This Place, was shortlisted for the Raymond Crossword Book Award 2014. Bagchi lives in New Delhi with his wife and son.