#FORTHELOVEOFIT – Pepsi MAX® is premiering its 2020 international football campaign in celebration of its ongoing partnership with the UEFA Champions League. Featuring a never-before-seen collaboration of four of the... 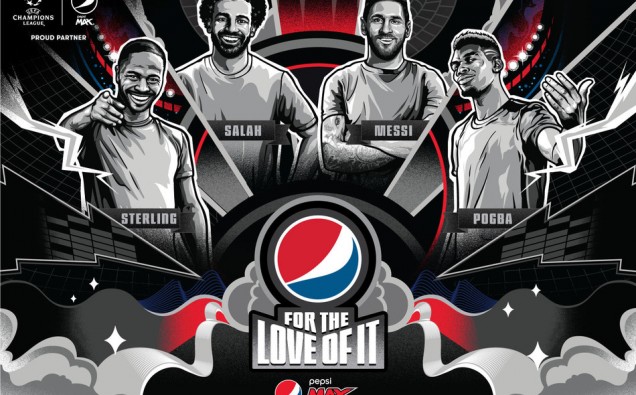 #FORTHELOVEOFIT – Pepsi MAX® is premiering its 2020 international football campaign in celebration of its ongoing partnership with the UEFA Champions League. Featuring a never-before-seen collaboration of four of the world’s best footballers, the campaign is led by a fast-paced, sharply-styled commercial guaranteed to excite football fans around the globe.

“It was a privilege to work with such superstar players on this year’s Pepsi MAX football ad,” said Scholfield. “Each delivered an excellently accentuated version of their off-the-pitch personality to the spot, as naturally and skillfully as they would on the field. Pepsi MAX, our creative team, and all of our post-production partners were awesome collaborators to work with. Each of them smashed it on every level, making the film the epic piece it is.”

This year’s commercial features the Latin song, “Presidente,” which is of-the-moment, fast, fun and full of energy, much like the 2020 Pepsi MAX football campaign. The track by emerging artist/producer WOST featuring singer Ginette Claudette demonstrates the brand’s commitment to supporting next-level music talent.

The campaign will be activated in more than 80 countries worldwide and sits under the brand’s international platform and tagline, PEPSI, FOR THE LOVE OF IT, which launched last year and encourages fans to go all-in for the things they love. The international campaign also boasts behind-the-scenes content, a collection of limited-edition player-themed cans, and out-of-home and in-store point of sale materials across Pepsi and Pepsi MAX (also known as Pepsi Black in select markets around the world).

Leo Messi commented: “As ever, being a part of the Pepsi football campaign has been so much fun. With a new team of players, exciting challenges, and a fun and creative film, the campaign will definitely not disappoint.”

Mohamed Salah said: “It’s great to be back for another year with Pepsi for another global football campaign. I know fans will like it.”

Paul Pogba commented: “It’s been so much fun filming the new Pepsi ad. I hope this year’s campaign continues to encourage our fans to embrace their passions and go all in for the things they love.”

Raheem Sterling said: “I’m buzzing to be a part of the Pepsi football squad! This year’s ad is packed full of great energy, with a true mash-up of music, fashion and most importantly, amazing football skills.”

While filming the 2020 football ad, Pepsi MAX captured the players showing off their hidden talents for the #PepsiCanBalance Challenge including Pogba perfectly balancing his limited-edition can on the edge of a glass and Sterling impressing crew members by balancing his can on his famous right foot. Salah and Messi follow suit, with Salah achieving the Can Balance on a football, and Messi’s steady hands balancing two cans simultaneously. The players inspired influencers and football fans to replicate the #PepsiCanBalance Challenge for themselves.

The campaign’s limited-edition packaging, which features all four players across Pepsi and Pepsi MAX / Black cans, offers a new interactive experience for football lovers. Fans can bring their packs to life through QR codes found on selected cans and unlock the opportunity to interact with mini augmented reality versions of Messi, Salah, Pogba, and Sterling. When scanned, consumers can play a keepie-uppie game with their favorite players and share their scores to Instagram Stories.

Natalia Filippociants, Vice President, Marketing, Global Beverages, PepsiCo commented: “We are so excited to be launching this lively and upbeat campaign. We’ve taken some of the best football players, incorporated their cultural influences off the pitch, and put them in unconventional situations with unexpected twists and turns, with plenty of laughter and swagger. Our aim was to play with the energy of the ad and to entertain people, rather than show people being entertained. Hopefully, our fans will enjoy these ‘Play Never Stops’ stories as much as we enjoyed making them!”

Pepsi MAX is a proud sponsor of the UEFA Champions League.

Join the conversation online with #FORTHELOVEOFIT.