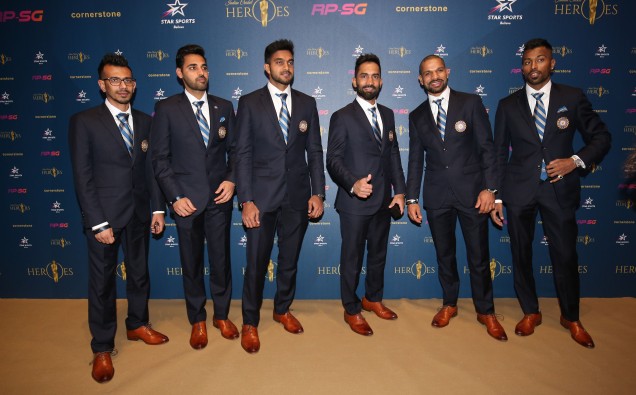 Wednesday 29th May, London: Rohit Sharma, Jasprit Bumrah, Poonam Yadav, Smriti Mandhana were among the esteemed awardees of the inaugural edition of the Indian Cricket Heroes, which was held at Lord’s Cricket Ground, London on 23rd of May ahead of the 2019 ICC World Cup. An initiative by RP Sanjiv Goenka Group, Cornerstone and Star Sports, the Indian Cricket Heroes is a recognition platform, which aims to elevate the stature of cricket by recognising and rewarding Indian cricketers across the Indian national Men’s and Women’s teams around the world.

This year’s event crowned the greatest performers in Indian cricket in the last 12 months across nine categories, with a special Heroes Tribute:

Speaking about the Indian Cricket Heroes and his role as Co-Chairman of the Jury, cricketing legend and India’s World Cup Winning ex-Captain Kapil Dev said, “The Indian Cricket Heroes is an important new chapter in India’s annual cricket calendar. This initiative will seek to recognise and award the best talent across the Men’s and Women’s teams from the country.

Choosing the winners for the awards was by no means an easy process and that is testament to the talent of the players. We looked at it from a data perspective but also a personal perspective to commend those who have shown excellence, hunger and professionalism in equal measure – that is what makes a true hero.

The timing and the location of the inaugural edition couldn’t have been better! Holding this event at Lord’s – the home of Cricket, and right before the start of the ICC Cricket World Cup 2019, is a morale boost for the team!”

The selection process involved Mohandas Menon and Star Sports providing statistics of the performance of eminent cricketers from the award period of 28th May ‘18 – 13th May ‘19. Nominations were shortlisted from the statistics and final nominations were voted by a rich roster of commentators from Star Sports panel. The final awardees were selected by the jury based on their deliberations and voting.

Speaking about the use of data and statistics in the selection process advisor to the jury, Mohandas Menon said: “Cricket is a game of keeping scores, and the numbers the heroes in this room have achieved are unmatchable. It is amazing to see how each player has grown over the years across different formats of the game. A big thank you to Indian Cricket Heroes to spearhead an initiative like this and recognise this talented bunch who have left no stone unturned in bringing laurels to the country.”

Indian Cricket Heroes is conceptualised by Sanjiv Goenka, Chairman, RP Sanjiv Goenka Group, Bunty Sajdeh, Founder of Cornerstone, India’s leading Talent Representation and Sports Management agency, and Star Sports, India’s leading sports broadcaster with a vision to establish itself as a premium rewards and recognition platform, a custodian of a premium infrastructure to identify great performances and unite cultures in the process.

Sanjiv Goenka, Chairman, RP Sanjiv Goenka Group and the Co-Chairman of the Indian Cricket Heroes Jury said, “Cricket is a sport that brings billions of people together, and to start our journey in London at the Home of Cricket is indeed very special. With this initiative, we have brought together the legends of the game – both past and present, from the Women’s and Men’s divisions. This is truly remarkable, and I hope it will inspire the generations of cricketers to come.”

Speaking about Indian Cricket Heroes, Harbhajan Singh, Indian Cricketer and Jury Member added: “It’s a great initiative by everyone in putting their hands together to get the Indian Cricket Heroes going, especially Sanjiv Goenka and Cornerstone. It’s important to recognise the performances of the players, and of course as a player that’s all you want. Every country has their awards, and now India has also started theirs – it’s brilliant.”

Speaking about the event, Bunty Sajdeh, Founder of Cornerstone said: “A high-calibre event such as the Indian Cricket Heroes is an important initiative that was long overdue. With India being the best cricketing team across all formats, the event has enabled us to convene stakeholders under one roof – legends both past and present, the promoters, the sponsors and global fans. Our vision was to ensure the entire cricketing fraternity from India was involved in the process to create a world class event, premiering at Lord’s the home of cricket. We look forward to taking the venture internationally to new shores each year to award and celebrate Indian cricketing excellence.”

The event was interspersed with a live charity auction where guests were able to bid for money-can’t-buy experiences and iconic gifts for charity.

Former Indian cricketer and jury member, Mohammad Kaif said: “These awards are to congratulate those who never give up. There are some hugely talented men and women here tonight and it shows just how strong the Indian cricket setup is at the moment, and we are of course so excited to see what the future brings with this current group – particularly at the World Cup of course. I think everyone here tonight should be proud of what they have achieved, and these awards go a long way to recognising this. It’s very fitting for the award to be held here in London, and it’s indeed special to be here at Lord’s where Mr Kapil Dev lifted India’s first World Cup at this very venue all those years ago.”

Ex-Indian Women’s Cricket Captain and Commentator, and Jury Member of Indian Cricket Heroes, Anjum Chopra said: “It’s a fantastic occasion and a fantastic initiative. It’s been an amazing period for Indian cricket, with the women’s side looking really strong and of course the men gearing up to fight for the World Cup now. It’s such a privilege to be part of the jury to recognise the amazing talent that we have. Considering the magnitude of the event, we ensured to be meticulous in our selection process, by being very objective and data driven, referring to the statistics. I’m so excited to see the initiative being an annual affair. To be here in London at Lord’s for the inaugural edition is an honour.”

Commentator and Jury Member Ayaz Memon said: “I think it’s fantastic to take these awards out of India so to speak and to bring it to the home of cricket at Lord’s – it can’t get better than that! It shows just how global cricket is now, and awards such as this establish India’s pre-eminence in the sport. The criteria of selecting the winners were led by data primarily. As a jury member, it was also important to look beyond just the stats and the performances and recognise the impact a player has on the game. It’s not enough to simply have a good average; it’s about how they impact the game to help their team in every sense.”